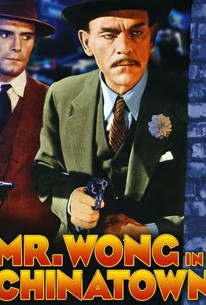 A mysterious visitor is found murdered in Mr. Wong's study in this, the third of Monogram's low-budget thrillers, featuring Hugh Wiley's Chinese detective. A startled Wong (Boris Karloff) learns from enterprising girl reporter Bobby Logan (Marjorie Reynolds) that the murder victim is Princess Lin Hwa (Lotus Long), in San Francisco to buy airplanes for her brother's army. Both the princess' traveling companion (Bessie Loo) and a mysterious dwarf (Angelo Rossitto) become victims of a mystery killer, who uses an ancient Chinese dart as his weapon of choice. The trail leads to a steamer in the San Francisco harbor, whose captain, Jalme (William Royle), is highly suspicious. Also among the would-be murderers are a phony airplane manufacturer (Peter George Lynn) and a local banker (Huntly Gordon). Although kidnapped by Jalme, Mr. Wong manages to unmask the real culprit.

Bessie Loo
as Lilly May

Guy Usher
as Commissioner
View All

It offers an exciting climax and a wonderfully droll comical performance by Karloff, and is one of the better films in the low-budget B-film series.

There are no featured audience reviews yet. Click the link below to see what others say about Mr. Wong in Chinatown!