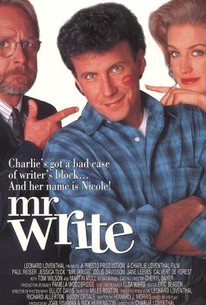 This romantic-comedy satirizes the advertising industry while chronicling the exploits of a would-be writer trying to break into commercials. As he tries to land an role in an ad he must contend with a variety of obstacles including dancing snacks, a domineering female director and Nicole the ad executive who slowly, after a good deal of initial conflict, becomes his lover. He also must deal with Nicole's hyper macho boyfriend Roger and her overbearing father, a junk-food magnate.

Gloria Salzer
as Mother in Play

Frank Colangelo
as Father in Play

Kelly B. Eviston
as Bunny

Kenneth Zanchi
as Man in Restaurant

Marla Flecker
as Woman at the Theater

There are no critic reviews yet for Mr. Write. Keep checking Rotten Tomatoes for updates!

There are no featured reviews for Mr. Write at this time.