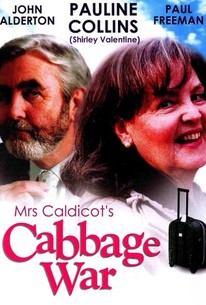 Ian Sharp's Mrs. Caldicot's Cabbage War concerns itself with Thelma Caldicot (Pauline Collins), whose life changes radically after the death of her husband. After her spouse dies, thanks to an errant cricket ball, Thelma is taken out of her home by her son Derek (Peter Capaldi) and her daughter-in-law Veronica (Anna Wilson-Jones). She is admitted to the Twilight Years Rest Home, which is run by Hawthorne (John Alderton). Upset with the care she and the other patients receive, Thelma leads a revolt.

There are no critic reviews yet for Mrs. Caldicot's Cabbage War. Keep checking Rotten Tomatoes for updates!

There are no featured reviews for Mrs. Caldicot's Cabbage War at this time.