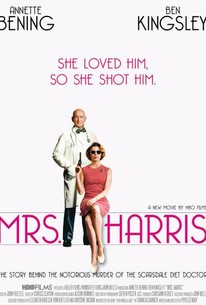 The sensationalistic murder of diet guru Dr. Herman Tarnower is explored in this stylized take on the tabloid cover story from first-time director Phyllis Nagy. As the inventor of the popular "Scarsdale Diet," Dr. Herman Tarnower (Ben Kingsley) became an overnight success during the peak of the early '80s diet craze. Despite the popularity of the Dr. Tarnower's revolutionary "lose one pound per day" diet, the womanizing ways of the Casanova cardiologist would soon come to a brutal end at the hands of his jealous, prescription drug-addicted lover Jean Harris (Annette Bening). Driven to despair after their 14-year romance failed to result in marriage and enraged by Dr. Tarnower's shameless status as a ladies' man, Harris confronts her former lover in one violent, final act of desperation.

Brett Butler
as Tarnower `Ex' No. 1

Lee Garlington
as Tarnower `Ex' No. 2

Jessica Tuck
as Wife No. 1

What [director Phyllis Nagy] has done is tailor this tabloid material to several different narrative tastes, which alternate as the movie shifts from love affair to temper tantrum to gunfire to murder trial and back again...

The film was 'inspired' by Shana Alexander's book, but the tone comes straight out of the tabloids. This tone lies somewhere south of smugness but north of pure derision.

It might not be up to the level of, say, Reversal of Fortune, but it's also far above your typical movie-of-the-week network filler.

The story is interesting, the characters are interesting, and while never boring, the picture never greatly impresses nor has much in the way of insight.

I found this movie a bit boring because the storyline wasn't all that interesting. Bening stars as Mrs. Harris, a troublesome woman who is being accused of murdering Herman after being in a relationship with him for 14 years. Herman had asked her to marry him but later backed out from this. This movie shows Mrs. Harris' suffering from mental illness. She may even have been suicidal at the time of the murder. The acting was fine but I thought that the movie was a bit too boring at times.

The film is loaded with fine performers doing good work but the people that are the subjects of this piece are either unlikable (Tarnower) or pathetic (Jean Harris) so it's hard to become too involved in the whole thing.