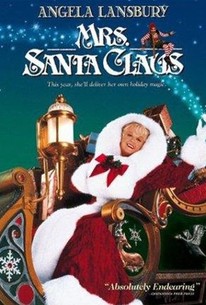 Angela Lansbury shows off her gifts as a singer and dancer in this holiday-themed made-for-TV musical. Near the turn of the century, Stanta Claus (Charles Durning) is busy getting ready for his annual toy delivery -- in fact, he's so busy he hasn't had much time for his wife, Mrs. Claus (Angela Lansbury), and his spouse has developed a case of cabin fever. Determined to get away and have some some fun on her own, Mrs. Claus hitches up the reindeer and takes them out for a quick spin around the world; however, she has reindeer trouble over New York City, and is forced to make an emergency landing. Stuck in New York for a week as her deer heal, Mrs. Claus's desire to help others quickly comes into play when she befriends a handful of children working in a sweatshop, as well as a group of women who've embraced the cause of sufferage for all. Mrs. Santa Claus first aired on December 8, 1996.

Bryan Murray
as Off. Doyle

Kristi Lynes
as Elf No. 1

Jamie Torcellini
as Elf No. 2

There are no critic reviews yet for Mrs. Santa Claus. Keep checking Rotten Tomatoes for updates!

Angela keeps this afloat but it's rather feeble and has too little to do with Christmas and too much to do with Dickens.