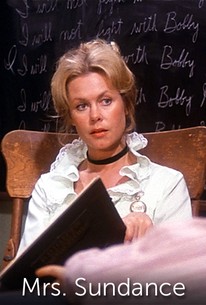 Fresh from her eight-season run on Bewitched, Elizabeth Montgomery embarked upon a whole new career as everyone's favorite TV-movie star in the ABC production Mrs. Sundance. Shamelessly promoted as a sequel to the movie megahit Butch Cassidy and the Sundance Kid, the film cast Montgomery as Sundance's schoolteacher widow Etta Place, the role played in the earlier movie by Katherine Ross. Like her outlaw husband, Etta finds herself on the lam from the law, with a $10,000 bounty on her head. Resigned to spending the rest of her life in hiding, Etta is ultimately flushed out by the rumor that Sundance is still very much alive (In truth, the authorities never found Etta Place, and even the date of her death is shrouded in mystery). Lensed on location near Lone Pine, California, the film represented the first on-screen teaming of Elizabeth Montgomery and her real-life future husband Robert Foxworth. Mrs. Sundance premiered January 15, 1974. ~ Hal Erickson, Rovi

There are no critic reviews yet for Mrs. Sundance. Keep checking Rotten Tomatoes for updates!

There are no featured reviews for Mrs. Sundance at this time.