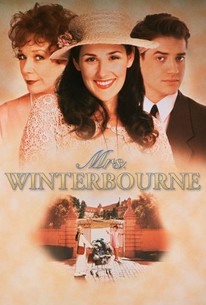 Actress-turned talk show diva-turned actress Ricki Lake returns to the big screen in this romantic melodrama as a luckless, pregnant small-town girl lost in New York City who boards the wrong train and ends up living a fairy tale when she is mistaken for the wife of a fabulously wealthy heir. Based on Cornell Woolrich's novel I Married a Deadman (it has been filmed twice before as No Man of Her Own, starring Barbara Stanwyck and I Married a Shadow), Mrs. Winterbourne is comparable in general tone to the far more successful Sandra Bullock vehicle While You Were Sleeping (1995). Lake plays Connie Doyle, a small-town girl with big-city aspirations. Unfortunately she isn't long in the Big Apple before she hooks up with sleazy Steve DeCunzo (Loren Dean), a soulless user who impregnates and callously dumps the destitute Connie. Anxious to leave New York, she accidentally boards a Boston-bound train and encounters charming Hugh Winterbourne (Brendan Fraser) and his pregnant wife Patricia. Connie admires Patricia's fabulous wedding ring and asks to try it on. Gracious Patricia hands it to the delighted Connie. At that moment the train crashes. Connie awakens in a hospital to discover that many died in the crash, including the Winterbournes. She is still wearing Patricia's ring and this leads her to be mistaken for Patricia, whom the wealthy clan had never met. At first she tries to set them straight, but then she realizes that this family could provide her newborn son with a privileged, cushy life that she could never give on her own and so goes to the posh Winterbourne mansion to live. There she meets the salty, ailing house matriarch, Grace Winterbourne (Shirley MacLaine), a woman who continues to smoke and drink against her doctor's wishes. A former reprobate (she had been a showgirl), Grace proves to be the only playful breeze in an stuffy, snooty family. Romance comes in the form of the late Hugh's twin brother Bill (also played by Fraser), who begins falling. Seeing that she lacks the gentility of a woman of Patricia's standing, he at first suspects her, but as time passes falls hard for good-hearted Connie's rather coarse charms.

Irene Pauzer
as Woman on Train

Johnie Chase
as Detective at Steve's

For a Cinderella story, it's sorely without magic.

The brazen sentimentality at work here -- while effective in the context of what some might call "a chick flick"-- doesn't give the material much weight.

Lake is a rather chilly and distinctly unpersuasive presence.

A waste of Fraser and MacLaine, utter failure of tone.

A straight romantic comedy that depends on Lake's charm and acting ability to keep it afloat. The result is disaster.

The plot remains joyless in its contrivances.

The result is indigestible.

A clunky, forced romantic comedy of mistaken identity that might as well have been called While You Were Dead.

Cute and relatively inoffensive. At times, even funny.

Absolutely charming romance. Brendan Fraser, for once, does not deliver an absurd performance. An Shiley MacLaine is wonderful.

Good heart-warming comedy as Ricki Lake looks so beautiful that she lost her own weight since Cry-Baby.

I really love this film. I dunno why. I think it's because Ricki Lake seems like someone you may actually meet. Cute story..and Shirley MacLaine owns it.

this was an okay semi comic take on the old story "I Married a Shadow" but better to wait and catch "No Man of Her Own" with Barbara Stanwyck a far superior film with much better acting.