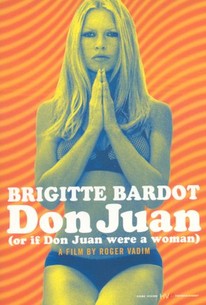 This campy Roger Vadim film stars sex-kitten Brigitte Bardot as Jeanne, the female counterpart to Don Juan, a woman who is ruthlessly wicked in her pursuit of love and desire. Jeanne confesses murder to a young priest (Mathieu Carriere) who is also her cousin, and after she tells him the story of how she has ruined the lives of a long succession of men, she shamelessly seduces the priest as well. Her story told in flashback, Jeanne gets off to a rocky start as an heiress: her father died while cussing her out for her low-down ways. She gets even with each of the men who does her wrong, usually in devastating ways, but in the end, she sacrifices all for love.

The movie only manages to showcase Roger Vadim's bad taste and lack of skill. [Full Review in Spanish]

There are no featured audience reviews yet. Click the link below to see what others say about Ms. Don Juan!