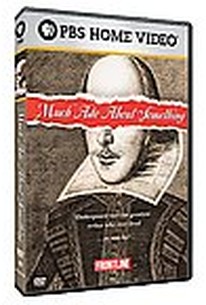 Michael Rubbo's sublimely entertaining documentary, MUCH ADO ABOUT SOMETHING, investigates the premise that the plays and sonnets of William Shakespeare were actually written by Christopher Marlowe. Relying on the expert testimony of historians, academics, and others, Rubbo builds his case carefully. He finds a cult-like group of Shakespeare debunkers who worship at the altar of Marlowe. Their proselytizing, corroborated by less biased witnesses, establishes that Marlowe was a brilliant student and a fine dramatist. Then, in the film's most compelling section, Rubbo examines Shakespeare's background, questioning the Bard's capacity to have written the work attributed to him. The film's final act is devoted to a detailed investigation, using reenactments, of Marlowe's murder, which allegedly took place before any of Shakespeare's plays had been written. Rubbo is a skilled provocateur, evidenced by the sly way he puts his questions to his subjects. He cleverly catches the Shakespeare supporters off guard with the information at his command, occasionally leaving them speechless. The filmmaker gets support from an unlikely source when actor Mark Rylance, director of Shakespeare's Globe Theater, acknowledges the virtues of "the Marlowe theory." The film is enjoyable, but the questions it raises are serious and merit further investigation.

Critic Reviews for Much Ado About Something

A lively and industrious piece.

Talk about your signifying nothing.

Has enough wit, energy and geniality to please not only the fanatical adherents on either side, but also people who know nothing about the subject and think they're not interested.

An entertaining documentary that freshly considers arguments the Bard's immortal plays were written by somebody else.

...an inviting piece of film.

This documentary traces with a giddy temperament the search for the "real" Shakespeare.

It's about the capacity and zeal of people who have found a cause that overwhelms their lives while making their eyes light up with joy. We should all have such passion.

An utterly compelling 'who wrote it' in which the reputation of the most famous author who ever lived comes into question.

Rubbo runs through a remarkable amount of material in the film's short 90 minutes.

All right, it's far-fetched. But it's fun to think about, and Rubbo makes a merry case. Will the real Bard of Avon please stand up?

Icon-bashing has never been as amusing as it is in Michael Rubbo's documentary Much Ado About Something.

There are no featured reviews for Much Ado About Something at this time.

Much Ado About Something Quotes