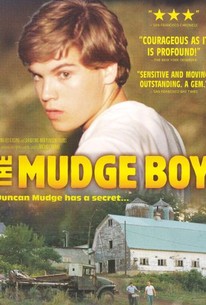 Writer/director Michael Burke makes his feature-length debut with the coming-of-age drama The Mudge Boy. Known as a weird kid, Duncan Mudge (Emile Hirsch) is a naïve 14-year-old farm boy with an aging father, Edgar (Richard Jenkins), and very little social life. When Duncan's mother suddenly dies, he develops a strange fascination with her clothes, speaks in her voice, and spends his time with his pet chicken. His father and the other people in the town just don't understand his behavior, while the other kids make fun of him. A drunken group of older boys call him names, but they eventually allow him to hang out with them if he provides beer money. Duncan admires one of the boys, Perry (Tom Guiry), who reveals some hidden truths about himself. As the relationship between the two deepens, it begins to take on darker, more ominous shadings. The Mudge Boy premiered at the 2003 Sundance Film Festival.

Munson Hicks
as Minister
View All

Critic Reviews for The Mudge Boy

Like a sturdy, well-observed short story, its narrative pieces put together with a plain elegance.

The Mudge Boy is odd and intense, very well acted, and impossible to dismiss.

Because the camera so closely follows Duncan -- there's scarcely a scene he's off-frame; his awkwardness is bold and unapologetic -- he sticks close to our sympathies.

A little picture -- the names of the entire cast would fit on half a sheet of paper -- but it's more heartfelt than movies with 50 times the budget.

It's not an easy film to watch, but it is a memorable one.

Tender, touching and tragic ... it's also rewarding and redemptive.

The seriousness is too often undercut by plot turns that are unintentionally risible...Hirsch and Jenkins are certainly the chief reasons to see it.

It may seem like just another movie about a boy and his father and the chicken that comes between them, but there's a heart-touching story underneath all the feathers.

You can hardly fault the details, the resonant silences, the sudden gushers of pent-up feeling.

Though more offbeat than it needs to be, Boy takes an unflinching look at a gentle spirit trapped in a macho, violent world.

This story must have been much more comfortable and rewarding to read on paper than it is to watch on screen.

Audience Reviews for The Mudge Boy

This was very disturbing, but I liked it. Emile Hirsch was great as always!

A film quite unlike anything I've seen before, The Mudge Boy deserves a larger audience then it is ever likely to get, thanks to its peculiar title, cheap, 70s looking cover art and "funded by cable" credentials. But it's a stunning film.

Duncan (Emile Hirsch) is a teenager trying to come to terms with the unexpected death of his mother. An outsider who doesn't have the self-awareness to express himself adequately and without any support in friends or his emotionally unavailable father, Duncan, who helps out on the farm he lives on, cycles the countryside with his favorite chicken and begins to form relationships with some of the people he meets.

Psychologically rich and complex, realistic, beautifully photographed and stunningly performed (Emile Hirsch, Richard Jenkins and Tom Guiry are all superb), The Mudge Boy builds to a devastating conclusion that is truly shocking and difficult to watch; a brilliant depiction of teenage life, sexuality and grief in all its forms.