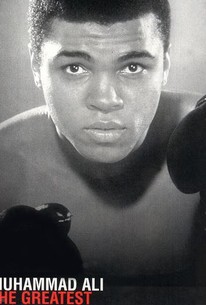 This portrait of former heavyweight champion Muhammad Ali was actually shot over two periods, the first leading up to his two mid-1960s bouts with Sonny Liston, and the other focusing on his 1974 "Rumble in the Jungle" with George Foreman. Unfortunately, for a film about boxers and boxing, there is very little fight footage. Directed by William Klein.

Has the advantage of immediacy.

The material in Muhammad Ali has been enriched by time, but it leaves one yearning for a film that covers the entire Ali career in somewhat greater detail and depth than was ever, apparently, Mr. Klein's concern.

Offers a rare glimpse of America's greatest fighter before he became a legend.

Hardly definitive ... contains some invaluable puzzle pieces to one of the most enigmatic and complex sports figures of all time

The three fights covered in this documentary are not pictured at all beyond a very few grainy stills.

Quirky enough to blow smoke around most other boxing documentaries.

Much better than the Oscar-winning When We Were Kings.

The film's glories are in the details and its intimacy would be unimaginable in the rigidly spin-controlled atmosphere of 21st-century sports.

There are no featured reviews for Muhammad Ali, the Greatest at this time.