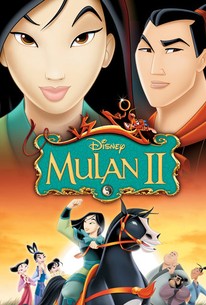 Mulan II, the direct-to-video sequel to the Disney hit Mulan, begins with the title character becoming engaged to General Shang. Before they can begin a life of wedded bliss, they must escort a trio of princesses to weddings of their own in order to facilitate a peace between warring nations. Mulan begins to believe her mission may be less than noble upon discovering that the women are being forced into arranged marriages against their will. Mulan ends up opposing her beloved General Shang in order to fight for what is right. ~ Perry Seibert, Rovi

It's no surprise that a script this addicted to fortune cookie utterances would fall short on presenting a sane, realistic version of China.

If it were any more trivial, it'd be invisible. Mulan II is, rather, more conceptually offensive.

Crap is still crap no matter what pretty gloss you throw on it.

It's harmless, sure, but it's also charmless.

Saving China was just The Beginning Not a good sequel! In Mulan II, Disney completely disregards all of the things that made Mulan appealing. The story is pointless and takes a cheap way out of every remotely deep question. The main problem of the Hun invasion is also never solved. The main message of being selfish with disregard to the well being of others is also troubling. This is another example of Disney ruining a good film with an unnecessary ugly sequel. I would recommend it maybe for kids but for the adults is a clear NO to watching this boring animated movie. Fa Mulan gets the surprise of her young life when her love, Captain (now General) Li Shang asks for her hand in marriage. Before the two can have their happily ever after, the Emperor assigns them a secret mission, to escort three princesses to Chang'an, China. Mushu is determined to drive a wedge between the couple after he learns that he will lose his guardian job if Mulan marries into the Li family. After the princesses unexpectedly fall in love with the Gang of Three, Mulan decides to help them escape the fate of marrying men they do not love. This contradicts the Emperor's orders and forces him to put Mulan's relationship with Shang into question. They are attacked by Mongolians, and the fate of China hangs in the balance.

Kinda cheesy from the great original.

I absolutely hated this movie. I was bored out of my mind watching the same stuff repeated in a different manor than the original! I wish this movie hadn't been made, because I felt sorry for the writers, who seem to have just thrown the script together.