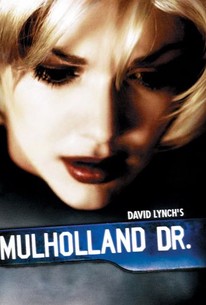 Critics Consensus: David Lynch's dreamlike and mysterious Mulholland Drive is a twisty neo-noir with an unconventional structure that features a mesmirizing performance from Naomi Watts as a woman on the dark fringes of Hollywood.

Critics Consensus: David Lynch's dreamlike and mysterious Mulholland Drive is a twisty neo-noir with an unconventional structure that features a mesmirizing performance from Naomi Watts as a woman on the dark fringes of Hollywood.

Critic Consensus: David Lynch's dreamlike and mysterious Mulholland Drive is a twisty neo-noir with an unconventional structure that features a mesmirizing performance from Naomi Watts as a woman on the dark fringes of Hollywood.

Along Mulholland Drive nothing is what it seems. In the unreal universe of Los Angeles, the city bares its schizophrenic nature, an uneasy blend of innocence and corruption, love and loneliness, beauty and depravity. A woman is left with amnesia following a car accident. An aspiring young actress finds her staying in her aunt's home. The puzzle begins to unfold, propelling us through a mysterious labyrith of sensual experiences until we arrive at the intersection of dreams and nightmares.

Enrique Buelna
as Back of Head Man

Johanna Stein
as Woman in No. 12

Richard Green
as The Magician

Rebekah Del Rio
as Herself

Lyssie Powell
as Blonde in Bed

With Mulholland Drive, the trance that comes so easily to him is finally charged with the doom of a classic.

Mulholland Dr is reissued some 15 years after it was released. It was rapidly hailed as the first great US film of the century. None since has been any more powerful.

It is an explosively sexy love story, rocket-fuelled with vanity and cruelty.

Mulholland Drive is pure cinema - a gorgeous, noir-narcotic loop of heartbreak in the "dream place" of Los Angeles.

...a black mirror in which the audience see whatever they want; a noir thriller, a history of Hollywood, a LGBT drama...

A beautiful, gripping fever dream. Loaded with haunting imagery and a star making performance by Naomi Watts, this is Lynch at his most accessible...without compromising any of his artistic vision.

It seems that the 21st century began with Mulholland Drive. [Full review in Spanish]

Delving into Mulholland Drive can be like falling into a rabbit hole. Yet it's a journey that has kept me fascinated, perplexed, and enthralled with every visit.

If, in the end, Mulholland Drive is too clever by half, no matter. Lynch's superb command of mise en scène makes his images and situations their own reward, rendering even the simplest gesture creepy and imbuing any innocence with evil.

B. Ruby Rich
The Nation
View All Critic Reviews (185)

One of the most complex, seductive and brilliant journeys into the obscure underworld of the unconscious mind to ever be experienced, brought to us by the incredible mind of a filmmaker who pulls us into an elaborate dreamscape that holds the key to an extremely sad reality.

An aspiring, fresh-faced young actress new in Hollywood discovers a woman in her appartment who is suffering from amnesia and they attempt to discover who she is using only a few slender clues. David Lynch once again delights and exasperates with this beautiful and always intriguing modern noir. It does not surprise me to discover that this was originally intended to be a TV show, as it reminded me a lot of Lynch's classic series Twin Peaks. It is not as baffling as much of Lynch's work, and although there are shades of Lost Highway in that suddenly the characters seem to become someone else, it does have a coherent narrative that explains all (if you were paying VERY close attention!) Lynch uses his trademark intensity of imagery and sound to create an otherwordly feeling, but it is not as sinister as some of his other work and so it's rather more accessible. In fact, the first two acts of the film do seem like just another post-Tarantino mystery thriller, but the finale of the film is quite astonishing. Another stylish and seductive headf*** from the master of the macabre.