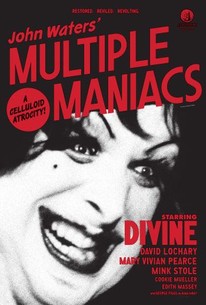 John Waters' gloriously grotesque, unavailable-for-decades second feature comes to theaters at long last, replete with all manner of depravity, from robbery to murder to one of cinema's most memorably blasphemous moments. Made on a shoestring budget in Baltimore, with Waters taking on nearly every technical task, this gleeful mockery of the peace-and-love ethos of its era features the Cavalcade of Perversion, a traveling show put on by a troupe of misfits whose shocking proclivities are topped only by those of their leader: the glammer-than-glam, larger-than- life Divine, who's out for blood after discovering her lover's affair.

Only John Waters could stage a Charles Manson-style slaughter then think: "This could really do with a giant-lobster rape scene to spruce it up."

For all its ostensible unpleasantness, Multiple Maniacs is cheapo, indie, queer American cinema at its most adversarial and thrillingly vicious.

Is it some kind of lost masterpiece? No. It's merely an interesting milestone on the path to Mr. Waters's better-known works ...

For newbies, this is the ideal place to start. Just do your best to pretend you're seeing it somewhere that isn't directly adjacent to a Jamba Juice.

John Waters interweaves his critique of noxious domesticity into the characters at the core of Multiple Maniacs.

Waters, as always, doesn't fall short of his promise in this sleazy, tawdry, hilarious harpooning of manners and mores.

More than forty-five years after it made its bow on Baltimore's underground scene, this cult classic's trashy profanity retains its spark.

Multiple Maniacs is a subversive movie atrocity that cries out to be seen to be believed. Enjoy.

Waters has a hard time figuring out where to point the camera in any given shot or how to keep his actors in focus, but he never loses sight, for even a moment, of his ultimate goal, which is to shock the world and crack himself up at the same time.

"Multiple Maniacs" wallows in perversion for perversion's sake because that's what it's there for. You can fight the ideas, but you can't fight the feelings that John Waters puts out there because his respect for filth runs so deep.

Multiple Maniacs' grimy cinematography, bonkers performances and showstopping turn from regular collaborator Divine make this indispensable viewing for aficionados of the strange, the surreal and the downright depraved.

Shot for $5,000, this '70s black-and-white curio was the "trainer wheels" for Waters' shockfest Pink Flamingos.

Not the greatest flick of Waters but it is one of the funniest, Divine stars as a ring mistress who operates a carnival that robs the patron, until she got bored and decided to kill them. Everything went wrong from that point onward. It was crude and silly but it was hilarious. Fans of John Waters won't be disappointed.

The film is a little uneven, unsure of where to go exactly and how to get there, but, trust me, what a fun ride it is. The cast is in top shape as always, and like in any Waters film there are plenty of shocks to be found. Always hilarious and highly enjoyable.

I watched this a couple of months or so ago, decided to chew it over before reviewing and now I come to do so I can't remember a great deal about it, which possibly tells you all you need to know about the quality of the movie. Poking fun at, among other things, the Roman Catholic church and the victims of the Manson Family, Multiple Maniacs certainly goes for the jugular in terms of tastelessness; the problem is, it's just not funny enough. John Waters is quite capable of writing amusing dialogue but there's precious little on display here. Instead, the movie is littered with tedious, over-talkative scenes that take an eternity to go nowhere, and even the two most infamous sequences - the "rosary job" administered on Divine by Mink Stole and the surreal appearance of "Lobstora" - outstay their welcome by several minutes. Curiously, Multiple Maniacs works best in its quieter moments, when it's not desperately trying to be offensive. For example, as I've said, the "rosary job" goes on forever and isn't all that funny, but the build up, with Divine's voiceover telling us one thing and the visuals exactly the opposite, is highly amusing. I also enjoyed David Lochary and Mary Vivian Pearce's star-crossed lovers routine.

well this is one of john waters first movies he ever made and it shows made in black and white and what had to be on a very low budget this is also got to be one of waters most weirdest movie i gave it this many stars for cult status alone and of course *the lobster scene*. Starring the usual band of misfts in john waters troop includeing Divine and Mink Stole