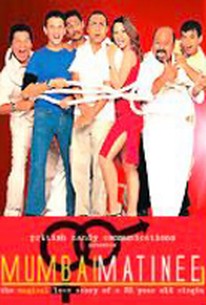 Good lucking and successful, 32-year-old Debu Chatterjee is enjoying the perks of bachelorhood with one exception -- for the life of him, he can't manage to lose his virginity. Consumed by the lack of sex, Debu's only hope is Baba Hindustani, a self-proclaimed sexual guru who introduces him to Kapoor, a young filmmaker, and offers him a bottle of "magical" pills. Though his virginal status remains unchanged, Debu unwittingly lets Kapoor film him doing some exercises, which Kapoor would manipulate into a pornographic film. Ironically enough, Debu gains popularity as an adult film actor and eventually attracts the attention of a female journalist. Despite initially refusing the interview, he manages to form a relationship with the journalist and, quite accidentally, finds love in his quest for sex. Directed by Anant Balani, Mumbai Matinee features Rahul Bose, Perizaad Zorabian, Saurabh Shukla, and Vijay Raaz. ~ Tracie Cooper, Rovi

Anusha Dhandekar
as Anusha, the Temptress

Pinky Chinoy
as Prostitute
View All

There are no critic reviews yet for Mumbai Matinee. Keep checking Rotten Tomatoes for updates!

There are no featured reviews for Mumbai Matinee at this time.