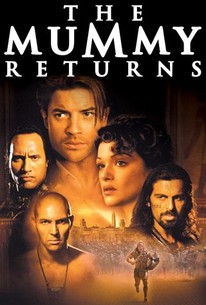 Critics Consensus: In The Mummy Returns, the special effects are impressive, but the characters seem secondary to the computer generated imagery.

Critics Consensus: In The Mummy Returns, the special effects are impressive, but the characters seem secondary to the computer generated imagery.

Critic Consensus: In The Mummy Returns, the special effects are impressive, but the characters seem secondary to the computer generated imagery.

This big-budget sequel from writer/director Stephen Sommers navigates much of the same cliffhanger territory as George Lucas and Steven Spielberg's Indiana Jones franchise. It is 1933, eight years after the events of The Mummy (1999). Legionnaire Rick O'Connell Brendan Fraser has married his Egyptologist girlfriend Evelyn Carnahan (Rachel Weisz) and the couple has settled in London, where they're raising their young son Alex (Freddie Boath). The family's domestic tranquility is shattered when the 3,000-year-old mummified corpse of Imhotep (Arnold Vosloo), which has been shipped to the British Museum, is resurrected once again to resume his evil quest for immortality. In the meantime, another ancient threat emerges in the form of the Scorpion King (professional wrestler Dwayne Johnson, aka. the Rock), a mighty warrior frozen in time with his supernatural army. In order to save his family, Rick is forced to seek a mythical pyramid of gold, facing marauding bands of pygmy skeletons, among other hazards. The Mummy Returns co-stars John Hannah, Oded Fehr, and Patricia Velasquez. ~ Karl Williams, Rovi

Dwayne Johnson
as The Scorpion King

Aharon Ipalé
as The Pharoah

Trevor Lovell
as Mountain of Flesh
View All

News & Interviews for The Mummy Returns

View All The Mummy Returns News

Critic Reviews for The Mummy Returns

A piss-poor mummy movie indeed that doesn't deliver a damn thing worth preserving.

A bully follow-up to the 1999 international smash

The sequel does little more than repeat the need-a-bigger-boat jokes, triple the digital effects, and forget entirely about the old Universal B-movies.

The nonstop action sequences are comparable to the original, though the timing and execution here lack the creativity and momentum needed to truly match up.

Feels like treading of the same old ground. And that's likely because no one here has really evolved.

More or less a wholesale recycling of the 1999 original.

...a computer generated stinker of a dud.

The whole two-hours-plus affair just soars along, brainlessly and breathlessly.

The film's bloated ambition seems of a piece with its panting, happy-dog charm. [Blu-Ray]

Audience Reviews for The Mummy Returns

Fresh off the first "Mummy" film, Brendan Fraser leads this great cast once again as cheesiness and corniness ensues, driving the film to what should be a fun ride again. This is not quite the case anymore, as the effects and story have both become more of a laugh than a celebration. I had a blast with the first film as it took the excitement level to unseen heights, but this sequel get's so caught up in what makes a fun film that it kind of implodes on itself, while having an insanely over-the-top conclusion. There are some pretty unwatchable effects, even for it's time, the story is only half as interesting, and the side plots do not have much of a payoff by the end. Not as cleverly written as the first film, the technical aspects as far as the Cinematography and editing go, are still very much intact. In the end, this sequel does not live up to the first in any way. Not recommendable, but it does helm a few cool scenes. "The Mummy Returns" is just plain mediocre.

Even though I enjoyed this film, I felt that it didn't meet or top the original. Mainly, I feel that the film focuses too much on the action rather than the horror that the first one created. However, the action sequences were satisfying, from the bus sequence, to the final battle between the Medjai and the armies of Anubis. Even though Arnold Vosloo still maintains his portrayal of power, he loses some of that original power as the danger and importance of his role is replaced with the race against time to stop the Scorpion King from being awaken. Overall, although I enjoyed most of the performances, like Fraser and Weisz, I feel that while it's enjoyable and is re-watchable, for me, its only the action sequences that make this worth returning to, rather than the characters, horror and the few yet strong battle scenes from the first film.

The one thing I can say about this sequel straight away is kudos for the continuity, Sommers has managed to gather all the original cast to carry on and this does wonders for an otherwise very average film. Usually you tend to see the odd character played by someone else which always looks poor in my eyes. Any who we kick off again with more nasty villains after treasure and power which we all know will end in tears...and probably some kind of horrible face melting death, there I go with my 'Indy' comparisons again. This time we have the combination of 'Imhotep' back for more punishment with his reincarnated love, 'the Scorpion King' which doesn't really serve much purpose other than to give 'The Pebble'....I mean 'The Rock' a spin off franchise and a small group of nasty well spoken cads led by British thesp Alun Armstrong. The main problem with this follow up is thus, they gave the now happily married heroes a son as baggage, this of course automatically equals a much kiddie friendly film with allot more slapstick, dumb humour and much much less horror. Of course the first film did very well so you can't blame them for opening up the film for an even wider audience but of course they lose allot of integrity and faith from the more mature fans. I should really point out that they take the Indy comparisons a bit too far by actually dressing all the villains henchmen in the same type of costumes as in 'Temple of Doom'....really that was the last Indy thing I swear. The entire film is much more of a cgi show this time around, that wouldn't be an issue but the cgi really has not dated well, even less so than the original film, hell even at the time this cgi wasn't too good. Add to this allot more over the top action which becomes too silly, terrible bluescreen shots, a laughable effort at a cgi scorpion cross 'The Rock' monster and almost the same sequences shot for shot from the first film in places...did I mention the horrific cgi? Yes you get what you pay for here, you want more ludicrous mummy blasting action? you got it, you want action figure characters all dressed in desert coloured attire spouting the most idiotic, state the obvious exposition dialog? look no further. Unfortunately like many blockbuster sequels they just get carried away and completely lose your suspension of disbelief. Can't complain too much as you know exactly what to expect from this and it doesn't pretend to be anything else, personally I think it was just a poor glossy rehash which is more cartoon than film. The final 20min as the action all comes together is one of the biggest cgi messes I've seen ever, everything looks really very clearly artificial, but hey the Egypt setting was an enjoyable ride.

Sequel to the Mummy. Their son starts a chain reaction that brings back the Scorpion King from the underworld. Good action movie with special effects.