The Mummy: Tomb of the Dragon Emperor2008 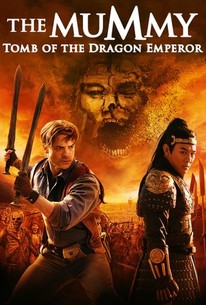 Critics Consensus: With middling CG effects and a distinct lack of fun, The Mummy: Tomb of the Dragon Emperor finds the series past its prime.

Critics Consensus: With middling CG effects and a distinct lack of fun, The Mummy: Tomb of the Dragon Emperor finds the series past its prime.

Critic Consensus: With middling CG effects and a distinct lack of fun, The Mummy: Tomb of the Dragon Emperor finds the series past its prime.

The Mummy: Tomb of the Dragon Emperor Videos

The Mummy: Tomb of the Dragon Emperor Photos

The Fast and the Furious director Rob Cohen continues the tale set into motion by director Stephen Sommers with this globe-trotting adventure that finds explorer Rick O'Connell and son attempting to thwart a resurrected emperor's (Jet Li) plan to enslave the entire human race. It's been 2,000 years since China's merciless Emperor Han and his formidable army were entombed in terra cotta clay by a double-dealing sorceress (Michelle Yeoh), but now, after centuries in suspended animation, an ancient curse is about to be broken. Thanks to his childhood adventures alongside father Rick (Brendan Fraser) and mother Evelyn (Maria Bello), dashing young archeologist Alex O'Connell (Luke Ford) is more than familiar with the power of the supernatural. After he is tricked into awakening the dreaded emperor from his eternal slumber, however, the frightened young adventurer is forced to seek out the wisdom of his parents -- both of whom have had their fair share of experience battling the legions of the undead. Should the fierce monarch prove capable of awakening his powerful terra cotta army, his diabolical plan for world domination will finally be set into motion. Of course, the one factor that this emperor mummy failed to consider while solidifying his power-mad plans was the O'Connells, and before this battle is over, the monstrous monarch will be forced to contend with the one family that isn't frightened by a few rickety reanimated corpses. ~ Jason Buchanan, Rovi

Liam Cunningham
as Maguire
View All

Critic Reviews for The Mummy: Tomb of the Dragon Emperor

As we move from city to desert to mountains, the action gets more frenetic and increasingly silly, which is no bad thing in a Mummy movie.

It's usually advisable to arrive for a film before it starts, but if you happen to be running late for this enjoyably brainless blockbuster, do not worry.

Overlong and overcrowded, this tired threequel soon has you yawning. John Hannah's cry: 'Die, you mummy b******s, die!' is the only line to raise a cheer.

The whole thing, despite its decent start and $100 million, looks a bit of a mess to me. An entertaining one, no doubt, for those who love the franchise, but a bore for those who don't much care but would have preferred a more well organised film

This reawakens but doesn't reinvigorate a franchise that was already curling at the edges seven years ago, with The Mummy Returns.

I can think of almost nothing good to say about the film, except that I enjoyed it immensely.

The only thing that really saves the film from being a complete debacle is Brendan Fraser's uncanny ability to sell even the dumbest scene.

The Mummy saga comes to a close with this mostly tedious and somewhat interminable entry...

This third installment of The Mummy franchise is full of action sequences that try to thrill, but ultimately just crash together into a rather predictable ball of mediocrity.

One of the most inane pieces of soulless product, churned out to make a quick buck, I have seen in quite some time.

Thankfully The Mummy doesn't forget its history and remains a tomb-raiding yarn without attempts to break genre conventions. For better or worse we get exactly what it says in the title: a mummy, a tomb and a dragon emperor.

Audience Reviews for The Mummy: Tomb of the Dragon Emperor

"The Mummy: Tomb of the Dragon Emperor" has the original cast together and it is in focus the entire time. There is not much else to say about this franchise killer, because the actors all seem to be foaming it in, the plot is too complex to be enjoyable, and the script is so dumb that I did not care about anything that was going on. While shorter than the first two films, it actually feels the longest. With so many bloated ideas plotted into this picture, there is not one interesting one to latch onto. Once Rick's son grows up, he kind of takes over the family business until his parents are dragged back into the Mummy world for one more ride. Like many "Last Time" films, it has run this franchise into the ground. There really are no redeeming qualities to this picture, which is sad. Ever since the beginning in 1999, these films have been going down hill. Recommendation: Just stay away.

Ultimately the absence of Rachel Weisz and the change in location and mythology are the biggest flaws in this film. Weisz was a major part of the first two films and by having her replaced by Maria Bello, the original character is lost and replaced with one that doesn't meet Weisz's performance. The fact that the story and mythology are set in China distances this installment very far away from the first two films due to the major change. This was one reason that I felt defeated the objective of having "The Mummy" title on this film. At the same time, Arnold Vosloo's Imhotep was "The Mummy" in the first two films and this time Jet Li's Dragon Emperor takes the role of the power hungry cursed creature. Again, this also made it irrelevant of having "The Mummy" title as it the location, mythology and villain have no links to the first two films. Another flaw was the obvious CGI effects which, even from within the first 7 minutes, can be very easily be told apart from physical and computer effects. However, the fact that Brendan Fraser and John Hannah reprise their roles didn't make this film a complete failure. Even though this film features some strong action moments, this highlight of the film was in fact one of the reasons that made me struggle to enjoy "The Mummy Returns"; they both focus too much on constant action and not the horror or characters to the extent that "The Mummy" did. Finally, the comical aspect of this film went too far as it attempted to be far more humorous than the other two. Again, this was one aspect which stopped me from full enjoying the first two films, and in fact stopped me from giving the first film the best score. Overall, this is obviously the weakest out of the trilogy. My advice, maybe watch it once and maybe act that only "The Mummy" and "The Mummy Returns" exist.

The storyline is interesting as it is about an evil Chinese Emperor (Jet Li) being raised from the dead. There are great special effects in the desert and also in the snow scenes. The fighting scenes are fab between Jet Li and Michelle Yeoh. The disappointing parts include Brendan Fraser's cheesy lines and the fact that he doesn't look old enough to have a grown up son!

Decent action, the wit of the first two movies is gone though and the chemistry between Brendan Fraser and Maria Bello was non existent.

The Mummy: Tomb of the Dragon Emperor Quotes