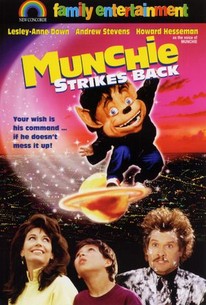 The original 1987 Munchies was a PG-rated horror spoof about a monster with an insatiable appetite for junk food. Though public domain was not forthcoming, a sequel, titled simply Munchie, came out in 1991; this time, the title character was an invisible imp who helped unpopular kids learn how to cope. Both films were chock-full of such TV icons as Harvey Korman, Dom DeLuise, Loni Anderson and Arte Johnson. The 1994 Munchie Strikes Back, starring Lesley-Anne Down and Andrew Stevens, eschewed the "scare" elements altogether and was geared strictly for the kiddie trade.

Lesley-Anne Down
as Linda McClelland

Natanya Ross
as Jennifer
View All

Critic Reviews for Munchie Strikes Back

There are no critic reviews yet for Munchie Strikes Back. Keep checking Rotten Tomatoes for updates!

There are no featured reviews for Munchie Strikes Back at this time.