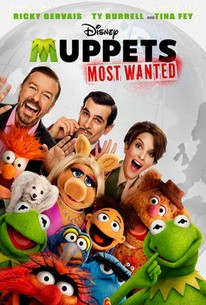 Critics Consensus: While it may not reach the delirious heights of The Muppets, Muppets Most Wanted still packs in enough clever gags, catchy songs, and celebrity cameos to satisfy fans of all ages.

Critics Consensus: While it may not reach the delirious heights of The Muppets, Muppets Most Wanted still packs in enough clever gags, catchy songs, and celebrity cameos to satisfy fans of all ages.

Critic Consensus: While it may not reach the delirious heights of The Muppets, Muppets Most Wanted still packs in enough clever gags, catchy songs, and celebrity cameos to satisfy fans of all ages.

Disney's "Muppets Most Wanted" takes the entire Muppets gang on a global tour, selling out grand theaters in some of Europe's most exciting destinations, including Berlin, Madrid, Dublin and London. But mayhem follows the Muppets overseas, as they find themselves unwittingly entangled in an international crime caper headed by Constantine-the World's Number One Criminal and a dead ringer for Kermit the Frog-and his dastardly sidekick Dominic, aka Number Two, portrayed by Ricky Gervais. The film stars Tina Fey as Nadya, a feisty prison guard, and Ty Burrell as Interpol agent Jean Pierre Napoleon.(c) Disney

Salma Hayek
as Herself

Aleksandar Mikic
as Other Guard

Saoirse Ronan
as Herself

Til Schweiger
as German Cop

Stanley Tucci
as Ivan the Guard
View All

News & Interviews for Muppets Most Wanted

Best Muppets Ever — Rank Them!
The Muppets‘ Show-Within-a-Show Is ‘Up Late With Miss Piggy’
Golden Tomato Awards 2014

View All Muppets Most Wanted News

Critic Reviews for Muppets Most Wanted

If it doesn't quite manage to equal the total satisfaction of its predecessor, it's hard to get too persnickety about a picture as joyful and sweet as this one.

The magic is largely missing this time. It starts promisingly enough with a rather good song about the pitfalls involved in doing a sequel but, after that, invention seems to flag and many opportunities are missed.

The fact is that Henson never lost his appreciation for non-conformity, whereas Bobin and Stoller are company men at heart. Yet the Muppets have a life of their own, and it's good to see them live on.

A lot of effort has gone into giving it the look and feel of a '60s heist movie. Sadly it had a disappointing opening at the US box office. It deserves better.

It lacks the original's fuzzy heart and the story drags in the middle but the quick-fire scene changes mean you're never too far from the next 'waka, waka, waka'.

It may not be easy being green, but it's easy to enjoy Muppets Most Wanted.

A return to the Muppet movies of old, packed to the gills with show biz in jokes, puns, songs and even a Swedish Chef homage to Ingmar Bergman.

It's a bit more devoted than its predecessor to keeping the Muppets themselves front and center rather than their human counterparts.

Not the star of the franchise, "Muppets Most Wanted" is still far better than most family films out there, and is definitely one you can enjoy right alongside your kids.

Muppets Most Wanted is a fun Muppet movie, despite the fact that it sometimes feels like they're trying too hard

We wanted them. We got them. The Muppets are back again with a vengeance with Muppets Most Wanted. Please sirs, I want some more.

Debbie Lynn Elias
Behind The Lens
View All Critic Reviews (202)

Audience Reviews for Muppets Most Wanted

Even more self-aware than the first and far less funny, "The Muppets Most Wanted" may have a likeable cast, but nobody can pull it off as well as Jason Segal and Amy Adams did in the first film. Having cameos is one thing, but having cameos to drive this story was kind of overwhelming and I just expected to see more which didn't make it very special. After Kermit is framed by a criminal mastermind who looks just like him, he joins the muppets and begins to ruin their show. This film has a little less cheese throughout it, but that is also what made the first one so special, so everything this sequel tries to do kind of works against it. "The Muppets Most Wanted" is liable for what it is, but in the end, it is just a cleverly written comedy that does not have much flare. Would I recommend it to fans of the first? Yes, but do not expect too much.

So at the start of this movie there is a little musical number with some lyrics rhythmically explaining that sequels are never quite as good, a cute self referential/self mocking gag. Well umm...gee, what can I say accept...bingo! Yes this whole movie is almost one big self referential joke crammed full of obligatory pop culture references that just make you groan and slump your head into your hands. The plot unfolds around a master criminal who happens to look identical to Kermit and is the number one criminal in the world. This amphibian wants to steal the British Crown Jewels with the help of Ricky Gervais who is the second best criminal in the world. So its a crime heist not too far off from 'The Great Muppet Caper'. So the fuzzy gang are trying to rejuvenate their show but are actually being used by the criminal duo who are unravelling a mystery that leads them to the Crown Jewels. Its all very 'Mr Bean-esque'. First up I didn't like the film title, second up why can't we have Muppet movies based around classic tales/legends/fables again? why am I not seeing a Muppet Robin Hood? Anyway the story putters along in a gentle manner dotted with the odd musical number which on the whole weren't too bad, I quite liked the Gervais and evil Kermit duet. It did seem like there would be a song every other five minutes at one point but thankfully not. I did actually like the character of 'Constantine' (evil Kermit), at first I thought he was merely a cheap Kermit clone (kinda is) but he is voiced really well by Matt Vogel and is quite humerous at times. A Russian accent coming out of Kermit along with some nice evil facial expressions which are simply Kermit's face scrunched up into a snarl...was unexpectedly funny. Gervais wasn't the outright satirical funnyman we all know this time around but he gels well with his mean green accomplice. The other amusing factor was the the second duo of Sam Eagle and Ty Burrell who plays a French Interpol Inspector. Despite the fact Burrell is clearly doing a hammy 'Inspector Clouseau' impersonation I can't deny that he does it well helped along by the stuffy Sam Eagle. Both bumble around in a predictable way looking for clues, Sam being the more keen by the books man/eagle, where as Burrell is the more laid back lazy not quite so intelligent European. The movie bounces around from one pretty destination to the next giving us fancy looking set pieces and not much else really. Most of the Muppets don't figure too much this time, nothing from Gonzo, Rizzo, Fozzie etc...or new boy Walter! and naturally there are many pointless needless cameos. I know these Muppet films have always had cameos but they used to be from real legends of the silver screen, these days its the dregs of pop culture like Lady Gaga and Sean Combs *groan*. Still can't work out what the Celine Dion singing cameo was about, she just appears for absolutely no reason what so ever and vanishes again! hope it was worth the money sheesh! I knew I wasn't gonna like this film much, I am a huge Muppet fan and grew up with the gang but ever since the final Muppet fantasy (Muppet Wizard of Oz) things have just gone down hill for me. Its all become very bland dull and chock full of annoying pop culture references and placements, the lovely fairytale fantasy element has all but gone. While the film wasn't terrible I wasn't overly impressed either. It just ticked along through unoriginal mundane formulaic fodder, no traditional Muppet hysteria present anywhere...until we reached the inevitably plain and predictable ending. What really summed it all up for me was the fact they tried to dodge the glaring problem of little imagination and creativity by going for this all out slightly satirical self referential gag angle like some sort of cover up, hoping no one will notice its all old hat. I guess it just manages to squeeze over the pass mark because its the Muppets and you can't help but love em. That is still no excuse for a lazy movie relying on familiar faces to bring in the dough, unfortunately they do seem to be doing this, shoving our fave Muppets on the big screen for some easy earnings. I'm happy for more Muppets but lets get back to the fantasy/sci-fi side of things please, it works so well with Jim Henson's creations. I'm waiting for the Muppet version of Dracula please...anyone.

While 2011's "The Muppets" was an excellent family film, its sequel turns out to be a solid kids movie, lacking the sharp script and creativity of its predecessor. There's still fun to be had here though, with decent musical numbers and charming characters.

for me, a tad better than the last muppets film. i think the biggest problem with the last film remains in this one, which is a misuse of characters. walter has cemented his place in the series, but at the expense of long standing characters who deserved more of a spotlight. overall the jokes were good, and the story was a lot of fun.