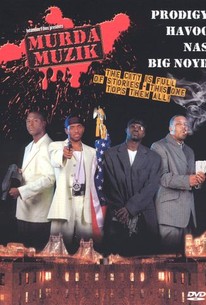 Hip-hop group Mobb Deep take its talents to the screen in this hard-edged urban drama with music, produced by Prodigy and stars other members of the crew. Fresh (Big Noyd) is a rapper who grew up in the gritty environment of the Queensbridge Housing Projects. Fresh's tight flow and street-smart rhymes have earned him a powerful local reputation, and he has signed a seven-figure deal with a major record company. Dealing with his new-found fame and fortune while trying to stay true to the street, however, isn't easy, and Fresh's tightrope walk between the two sides leads him down a dangerous path with violent consequences. Murda Muzik features new music from Mobb Deep, as well as tracks from 50 Cent, Snoop Dogg, and Nas.

There are no critic reviews yet for Murda Muzik. Keep checking Rotten Tomatoes for updates!

There are no featured audience reviews yet. Click the link below to see what others say about Murda Muzik!