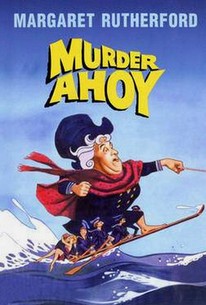 The last of Margaret Rutherford's "Miss Marple" films, Murder Ahoy is the only one of the series not based on an Agatha Christie original. The setting this time is a boat that has been purchased by a trusteeship to serve as a home for wayward kids. One of the trustees, Cecil Ffolly-Hardwicke (Henry Longhurst), dies while attending a meeting held aboard the boat. The police write the death off as "natural causes," but another trustee, our Miss Marple (Rutherford), suspects otherwise. Doing a little sleuthing on her own, she discovers that outwardly respectable Lionel Jeffries is using the boat as a "training school" for aspiring criminals, a la Fagin. This would seem to explain why Hardwicke was murdered, but Jeffries is much too obvious a suspect--as Miss Marple discovers nearly too late. Margaret Rutherford's husband Stringer Davis is back again as Miss Marple's platonic middle-aged friend Mr. Stringer. ~ Hal Erickson, Rovi

...without a Christie novel for guidance, this third (Rutherford) entry is the weakest of the lot. By far.

This mystery wasn't nearly as compelling as some of the previous ones but Margaret Rutherford is still the most enjoyable Miss Marple.

By far my favourite of the four Rutherford Marple movies. Set on a ship, Marple investiages a series of mysterious murders on and off board the ship. The setting heightens the densitiy and sense of isolation for Miss Marple and make the movie the more enjoying. A very good supporting cast round up this cozy classic whodunnit. One of the best.