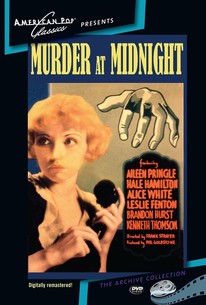 A sophisticated, expensively-dressed group of people gather in a spooky old mansion to watch the first performance of a play. The highlight of the production is a realistic on-stage murder, wherein the victim is shot point-blank, right through the heart, as the clock strikes 12. The audience applauds enthusiastically as the "victim" falls dead, but the applause subsides and gives way to screams of terror when it turns out that the murder is for real! With everyone in the mansion under suspicion -- including, naturally, the butler -- the cops are baffled, and even more so when the primary suspect ends up as victim number two. "This isn't a murder case, it's an epidemic!" moans one of the detectives. Intricately plotted, and with a genuinely surprising solution, Murder at Midnight is far and away superior to your average low-budget mystery.

Brandon Hurst
as Lawrence the Butler

Robert Ellis
as Channing
View All

Critic Reviews for Murder at Midnight

There are no critic reviews yet for Murder at Midnight. Keep checking Rotten Tomatoes for updates!

There are no featured reviews for Murder at Midnight at this time.