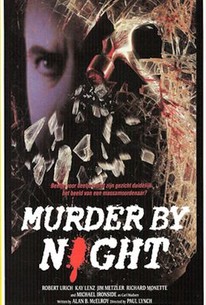 The USA Network may have been a relatively new service in 1989, but it wasn't above trotting out an old reliable plot device in the made-for-cable movie Murder by Night. Robert Urich stars as a murder witness who is clunked over the head by the killer. When he comes to, he can remember none of the details of the murder. By and by, he becomes convinced that he himself is the murderer--and that he may soon strike again. Ignore the bromidic dialogue in Murder by Night and stick around for the shockeroo ending. The film had its world premiere on July 19, 1989.

Critic Reviews for Murder by Night

There are no critic reviews yet for Murder by Night. Keep checking Rotten Tomatoes for updates!

There are no featured reviews for Murder by Night at this time.