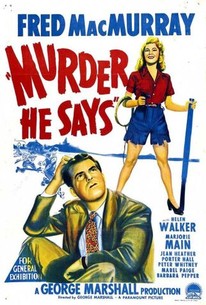 Though it comes on much too strong at times, Murder, He Says fully justifies its present "cult" status. Professional pollster Pete Marshall (Fred MacMurray) gets more than he bargained for when he heads to hillbilly country to investigate the disappearances of several of his colleagues. Poor Pete stumbles across the Fleagle family, who have a quaint habit of murdering anyone they consider to be a nuisance. Whip-wielding Mamie (Marjorie Main), her deceptively meek husband Mr. Johnson (Porter Hall) and her hulking, lamebrained twin sons (both played by Peter Whitney) are searching for $70,000 hidden by Bonnie Parker-like desperado Bonnie Fleagle, and they don't intend to be disturbed by any outsiders like Pete. Having previously poisoned their troublesome grandma (Mabel Paige) with a curious substance that causes its victims to glow in the dark, Mamie and her brood try to dispatch Pete in the same manner, leading to an uproarious slapstick setpiece involving an elaborate "Lazy Susan" table. Complicating matters is the arrival of two different women (Helen Walker, Barbara Pepper) claiming to be the long-lost Bonnie Fleagle. Jean Heather costars as Elany Fleegle, the only sympathetic (but no less crack-brained) member of the killer brood. Its comedy content aside, Murder, He Says would be memorable for its eye-popping split-screen photography, thoroughly convincing the audience that Peter Whitney is indeed two different people.

Critic Reviews for Murder, He Says

Though essentially a demonstration of how cleverly thirty minutes of entertainment can be stretched out into ninety minutes of tedium, just by repeating everything three times, the picture was rather better than most of its species.

One of those movies that never becomes one of the 'great' comedies, but it's sufficiently entertaining and funny that it ought to be better known.

There are no featured reviews for Murder, He Says at this time.