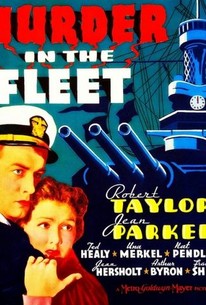 Murder in the Fleet Photos

Having gained considerable audience attention for his appearance in the 1935 "Crime Does Not Pay" 2-reeler Buried Loot, new MGM contractee Robert Taylor was awarded with his first starring feature, the modestly budgeted Murder in the Fleet. Taylor is cast as Lt. Tom Randolph, one of several naval officers confined to his ship when a murder occurs. The victim was in the process of delivering the components for a new electrical flight-control device, thus everyone concerned is suspected of being a killer, or a foreign agent, or both. Several more murders occur before Lt. Randolph takes matters in his own hands and tracks down the culprit. The supporting cast is a film-buff's dream, including such favorites as Mischa Auer, Tom Dugan and Ward Bond in minor roles.

Critic Reviews for Murder in the Fleet

It must be admitted that the comedy relief provided by Nat Pendelton and Ted Healy is the kind you get from a headache' that takes your mind off other things.

There are no featured reviews for Murder in the Fleet at this time.

Murder in the Fleet Quotes