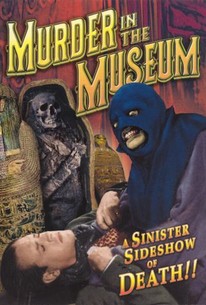 Murder in the Museum Photos

The distinguished Henry B. Walthall, a major star of the early silent screen, headlined this cheap whodunit that fully capitalized on his remaining box-office pull in the hinterlands. Walthall plays Professor Mysto, a carnival magician warned by his boss, Carr (Lynton Brent), that a group of reformers headed by the police commissioner (Joseph W. Girard) and a teetotalist councilman (Sam Flint) are after him. When the latter is murdered, both Mysto, Carr, and a concessionaire (John Elliot) are among the suspects, the last mentioned admitting ownership of a .45-calibre gun. The concessionaire, however, is released when it becomes clear that the lethal bullet came from a .38-calibre weapon. Newspaperman Jerry Ross (John Harron), who is in love with the commissioner's pretty daughter (Phyllis Barrington), attempts to scoop the competition by unmasking the killer, but is knocked unconscious by a hooded figure. Carr, who is guilty of selling bootleg liquor in his establishment, manages to flee the law but is eventually killed by a jealous employee. None of this leads Jerry closer to the killer, who, it later turns out, has invented a device that equips a .45-calibre gun to fire .38-calibre bullets. In the end, however, the killer is unmasked and Jerry proposes to the police commissioner's daughter.

Al Hill
as Detective
View All

Critic Reviews for Murder in the Museum

There are no critic reviews yet for Murder in the Museum. Keep checking Rotten Tomatoes for updates!

Audience Reviews for Murder in the Museum

There are no featured audience reviews yet. Click the link below to see what others say about Murder in the Museum!

Murder in the Museum Quotes