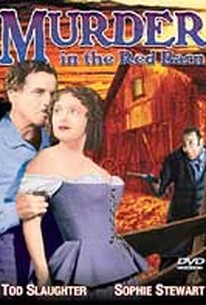 The film opens on a theatrical stage where the principal players are introduced in a manner that suggests the audience already knows the story about to be played out. It begins inside the Red Barn in Polstead, Suffolk, where local girl Maria Marten (Sophie Stewart) dances with local, middle-aged squire and magistrate William Corder (Tod Slaughter) during a merry barn dance. Stealing a moment from the festivities, Carlos, a gypsy (Eric Portman) declares his love for Maria, but she rebuffs him and does not disclaim her interest in Corder. Corder is angered when a gypsy palm reader gives him a bad fortune and all of the gypsies are ejected from the party. Maria catches up with Corder later and shares a drink with him at his home; meanwhile, her father (D.J. Williams) notes Maria's absence and suspects her out with the gypsy. Corder, in the meantime, has become intimate with Maria and sends her home, promising marriage. A chance encounter with Carlos is interrupted by Maria's father, who pleads with Corder to have the gypsy barred from the locality. Corder then travels to London and loses big with a disastrous tumble of the dice; Corder schemes to recoup his losses through wooing a local widow of means, plans that do not include Maria. Over time, Maria's delicate condition becomes apparent and her father casts her out of the family home. Maria approaches Corder for help, but becoming aware of her dire situation threatens to tell her father the truth. Corder renews his pledge to marry Maria and tells her to meet him at the Red Barn in couple of hours. Once there, Corder shoots Maria with a pistol and buries her body under the floor, but misplaces a damning piece of evidence at the scene. Disarmed by the pleas of Maria's grieving mother (Clare Greet, a favorite actress of Alfred Hitchcock's), Maria's father resumes the search for her. Carlos appears at Corder's and begins to pressure him about Maria's whereabouts; they are interrupted and Corder sets a trap for the gypsy which he barely escapes. Carlos, Corder, Mr. Marten and a number of police constables all end up at the Red Barn; at first it looks bad for Carlos, but when Corder's own dog begins sniffing around in the barn, Corder finds himself facing a spell of misfortune that will make his poor luck at the dice table seem insignificant by comparison. ~ David Lewis, Rovi

Herbert B. Leonard
as Compere

Critic Reviews for Murder in the Red Barn

There are no critic reviews yet for Murder in the Red Barn. Keep checking Rotten Tomatoes for updates!

Audience Reviews for Murder in the Red Barn

The production code people probably hated this movie! It takes a more realistic and pessimistic view. Slaughter stars as the villain, of course, and he does a great job. This was a good movie, but it does have some rough spots. Still I would recommend seeing it.

Murder in the Red Barn Quotes