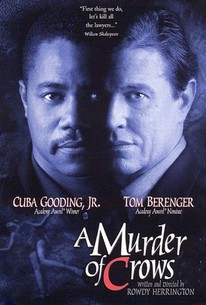 A Murder of Crows Photos

In this suspenseful drama, a disbarred lawyer forgoes the writing of his own book in favor of taking credit for that of a writer who is murdered shortly after giving the attorney his unpublished manuscript to read. A murder-mystery, the book becomes a best-seller and once again the former lawyer finds himself at the top -- until the circumstances of the real writer's death and a series of other deaths lead police to accuse him of being a serial killer.

Critic Reviews for A Murder of Crows

A bit silly as a thriller.

Audience Reviews for A Murder of Crows

Sometimes a film is so well written, that even though you know what's coming, you're still on the edge of your seat. A Murder of Crows is an independent film with some big time star power, that makes a terrific story that much better. The film focuses on Lawson Russell, (Cuba Gooding Jr.) a successful New Orleans defense attorney, who suddenly finds his conscience. A series of events leads to his disbarment, so he begins life a new in Key West. Once there, he meets a lonely old man looking for a friend. The old man insists that Russell read his crowning achievement, a novel. Russell is more than impressed with the book and goes to tell his friend about it when he finds that the old man has died. Russell then suddenly loses his conscience again and decides to pass the book off as his own. Russell's life seems to be back on track until the FBI shows up and arrests him. As it turns out, the murders depicted in the book weren't fiction and Lawson Russell is the prime suspect. From there the film turns into a mystery, who was this old man? Why did he set Lawson up? Who is the real killer? As I said the story is ingenious and very well written, unfortunately, I watch a lot of movies and actually figured the whole thing out, twenty minutes into the film. It wasn't that the film was predictable, most of the other reviews I've read seem to suggest that most people were shocked by the ending. I have no idea why I figured out what was going on so quickly, but this film is so good, that even knowing what was going to happen, I still loved it. Cuba Gooding Jr. was just off the charts good in this movie, he brings such energy and charisma to this role, that it easy rivals his Academy Award winning performance in Jerry McGuire. The rest of the cast is terrific as well, but all the other parts were seemingly bit parts that centered around Lawson Russell. This movie was the perfect fit for Cuba Gooding Jr. and was one of the best written films I've seen all year. A Murder of Crows proves that you don't need a big budget, with huge special effects, in order to make an extremely entertaining film. Gems like this one are rare, but ultimately are the whole reason I watch Independent films.

Despite the fact this film has the appearance of a TV movie its actually a decent little thriller. On the whole the film is quite tame and the plot is rather quaint, it could almost be a mystery for Agatha Christie's 'Hercule Poirot' or 'Miss Marple'. The plot is about a lawyer (Cuba Gooding) who is disbarred and goes off to live in the Florida Keys to write. He meets an old man whom he becomes friendly with, the old man shows him his novel and promptly dies days later. The novel is a top class murder thriller so Gooding's character decides to sell it as his own book, it goes viral and he becomes rich. It later becomes apparent that all the murders in this book are based on real unsolved murders, thusly Gooding's character becomes the main suspect. Its up to him to get to the bottom of the whole ordeal. The film is obviously played out as if you the viewer were reading a book, there is a constant narration through most of the film from Gooding. There is very little violence, no swearing I believe and the odd moment of action...oh and some sex n ass shots. The stalwart Tom Berenger plays the detective hunting Gooding's character down in a nice almost apologetic way, whilst Gooding suits the role of the innocent helpless fresh faced young ex-lawyer perfectly with his goodie goodie looks. Overall a very solid film which is more of a 'who dunnit?' than thriller, its not tense enough to be called a thriller. The films dark title kinda gives you the wrong impression really, the film is more like a classic mystery from the 40/50's era of the silver screen.

Great Thriller. Solid Story, great acting, and my fav great Costumes. Amitraj and Andrew Stevens productions are very random. Mark Pellegrino is very under rated actor. He is a Multi Talent I tell you.

This thriller has a genuinely original plot and is very well written. The plot twist isn't easily spotted and will definitely have viewers guessing for a long time. It's fast paced and well directed by Rowdy Herrington, who's really a director to look for. Cuba Gooding Jr. does a good job in the lead, proving he can well handle dramatic parts as well. Tom Berenger does well, as always, in a relatively small part as a tough detective. A Murder of Crows is a suspenseful and thoroughly entertaining thriller that deserves to be better known.

A Murder of Crows Quotes