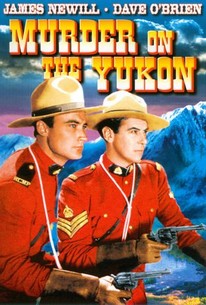 In the sixth of eight Renfrew of the Royal Mounted "Northwesterns," mounties Renfrew (James Newill) and Kelly (Dave O'Brien) come across the body of a murdered prospector, Jim Smithers (Budd Buster). The dead man's cabin has been tossed, it turns out, and when his alcoholic brother (Al St. John) is found dead as well -- a none too convincing suicide -- Renfrew begins to suspect that the deaths may be connected to a counterfeit ring operating from a general store on the Yukon. In addition to Betty Laidlaw and Robert Lively's signature tune "Mounted Men," James Newill performs Vick Knight, Johnny Lange, and Lew Porter's "Ah, Here's Romance" and "Down the Yukon Trail." Murder on the Yukon was based on characters created in 1931 by Laurie York Erskine.

'Snub' Pollard
as Archie
View All

Critic Reviews for Murder on the Yukon

There are no critic reviews yet for Murder on the Yukon. Keep checking Rotten Tomatoes for updates!

There are no featured reviews for Murder on the Yukon at this time.

Murder on the Yukon Quotes