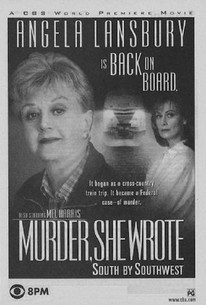 Three years after the cancellation of her popular series Murder She Wrote, Angela Lansbury returns for the first of several TV-movie followups to that selfsame series. Once again, Lansbury is cast as Jessica Fletcher, best-selling mystery writer and amateur sleuth. As indicated by the film's title, Hitchcock references abound in the plotline, beginning when a lady vanishes on the train that Jessica is taking to El Paso to deliver a lecture. Helpful Jessica accepts a message for the mystery woman, whereupon she is attacked by an assailant in search of "it." Our heroine is rescued by a journalist who may not be a journalist, then when attempting to ascertain the missing woman's whereabouts Jessica is warned to mind her own business by a guy identifying himself as an FBI agent. Inasmuch as such warnings have never stopped Jessica in the past, she follows the trail of clues to the desert town of Agua Verde, Arizona, adopting a few aliases alng the way. The climax is an echo of Hitch's The 39 Steps, wherein Jessica not only solves the mystery but also unmasks the Least Likely Suspect (or in this case, Least Likely Suspects). Produced and directed by Angela Lansbury's sons, Murder She Wrote: South by Southwest first aired November 2, 1997 on CBS. ~ Hal Erickson, Rovi

Critic Reviews for Murder, She Wrote: South by Southwest

There are no critic reviews yet for Murder, She Wrote: South by Southwest. Keep checking Rotten Tomatoes for updates!

There are no featured reviews for Murder, She Wrote: South by Southwest at this time.