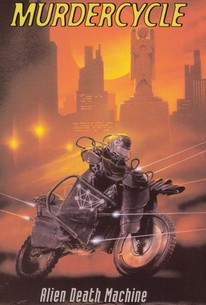 In this science fiction thriller, an alien life form lodged inside a meteorite crash-lands in the desert near a secret military base. When a young man on a dirt bike happens upon the alien, it takes over both his body and his bike, and he discovers the alien visitor's mission on earth: the CIA has captured a mechanism aboard a UFO that can send and receive information, and it's alien owners want the transmitter back. Soon government operative Woods (Michael Vachetti) and psychic investigator Dr. Lee (Cassandra Ellis) find themselves doing battle with the biker-turned-alien thug.

There are no critic reviews yet for Murdercycle. Keep checking Rotten Tomatoes for updates!

One of those times where the title and it's poster are far better than the actual movie. And what's up with the Murdercycle sounding alot like the monsters from original Doom game?