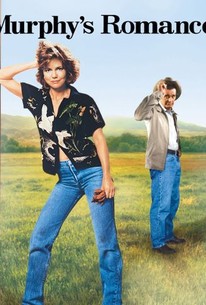 Newly divorced Emma Moriarty (Sally Field) moves herself and her young son to a small Arizona town, hoping to establish a horse farm. Town pharmacist Murphy Jones (James Garner), the town's most eligible bachelor, develops a platonic friendship with Emma, but he decides to keep his distance when her ex-husband Bobby Jack (Brian Kerwin), who claims he's changed his irresponsible ways, moves back in with her. At a party at Emma's ranch, Murphy and Bobby Jack get into a verbal row, but nothing is settled until Wanda (Anna Levine) shows up with two babies in tow, claiming that Bobby Jack is the father. Once rid of her ex, Emma commisserates with her friend Murphy at his drug store--and is quite surprised to discover that she's fallen in love with the older man, and he with her. Murphy's Romance is a very gentle romantic comedy; even Murphy's cast-away lady friend (Georgann Johnson) behaves like a civilized human being instead of a woman scorned.

John Higgenbotham
as Boy at Barbecue

Martin Ritt directs the screenplay by Harriet Frank Jr. and Irving Ravetch, who cross the country wisdom of Tennessee Ernie Ford with the stale wit of the Johnny Carson joke team.

The picture just lumbers along, lightly propelled by a series of contrived conflicts ... and anecdotal observations that don't add up to much.

A depressing barometer of contemporary Hollywood.

Mr. Garner and Miss Field are able comic actors, but they can't be much better than the corny material, the occasional one-liners and an overall sunniness that refuses to set.

...a slow-burn romance that benefits substantially from the often enthralling work of its actors.

Will likely provide some quiet enjoyment for those who believe that, despite the giant screen, small is beautiful.

Field relaxes into a sunny and seductive performance. She and Garner play off each other beautifully.

Director Martin Ritt and screenwriters Harriet Frank, Jr., and Irving Ravetch rely too heavily on little vignette sequences to move the narrative, a technique that quickly becomes tedious and predictable.

Mildly engaging but well acted romantic melodrama, especially by James Garner, who received his first and only Best Actor Oscar nomination for playing a small-town pharmacist.

This fall-spring relationship may be a little bit difficult to understand but James Garner ends up being charming enough to win over Sally Field. One suspects this is due to a lack of options. Very sweet rather than creepy.

Very good movie :) A nice movie to watch on a rainy day when there's nothing else to do. Gardner & Field were great in this movie :)

Year in and year out, James Garner delivers. He and Field have great chemistry in this May-December romantic comedy.