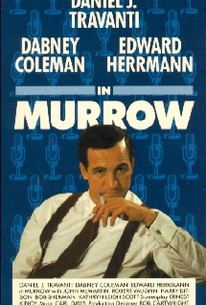 Daniel J. Travanti plays a glum, no-nonsense Edward R. Murrow in this made-for-TV biopic. We follow Murrow's rise to prominence as America's foremost news commentator between the years 1940 through 1955, beginning with his on-the-spot radio coverage of the bombing of London. After the war, Murrow hosts CBS television's documentary series See It Now, which eventually leads to his legendary confrontation with Red-baiting Senator Joseph McCarthy. Murrow's own occasional compromises with his conscience, and his extramarital affairs, are bypassed in Ernest Kinoy's lean, spare script. Of more importance in the scheme of things is Murrow's edict that TV "can teach, can illuminate, and damn it, can inspire." Also in the cast are Dabney Coleman as CBS head-honcho William Paley, John McMartin as Frank Stanton, Edward Herrmann as Fred Friendly, David Suchet as William L. Shirer, and Robert Vaughn as President Franklin D. Roosevelt. Murrow debuted January 19, 1986, as an HBO Premiere Films presentation

Ted Maynard
as Howe
View All

There are no critic reviews yet for Murrow. Keep checking Rotten Tomatoes for updates!

There are no featured reviews for Murrow at this time.