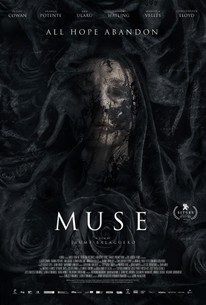 Samuel Salomon, a literature professor, has been off work for almost a year after the tragic death of his girlfriend. Samuel has been suffering from a recurring nightmare in which a woman is brutally murdered by a strange ritual. Suddenly, the same woman who appears every night in his dreams is found dead in exactly the same circumstances. Samuel sneaks into the crime scene and there he meets Rachel who has also dreamed about the murder. Together, they will do whatever they can to discover the identity of the mystery woman, entering a terrifying world controlled by the figures who have inspired artists throughout time: The Muses.

For followers of Balagueró's work, 'Muse' will become a frustrating experience. [Full Review in Spanish]

'Muse' is disappointing, but it does not make us lose hope: Jaume Balagueró can and must return to the dark and perverse horror that once marked Spanish horror movies. [Full Review in Spanish]

Muse is the perfect example of a plot that sounded good as an idea, but was never fully developed in the script. [Full review in Spanish].

[Jaume Balaguero] has a way of enclosing evil in his images that is as disturbing as it is beautiful. [Full Review in Spanish]

[The] narrator is unable to tell the story with emotion. [Full Review in Spanish]

[Director] Jaume Balagueró seems to be imprisoned within the walls of his own films, all of them seem to be the same... [Full review in Spanish]

There are no featured audience reviews yet. Click the link below to see what others say about Muse (Musa)!