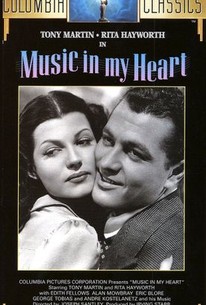 Music in My Heart Photos

Boasting Tony Martin and Rita Hayworth and bandleader Andre Kostelanitz as its leading players, it's surprising that Music in My Heart isn't better than it is. Martin plays European-born actor Robert Gregory, who while rehearsing for a Broadway musical falls in love with chorine Patricia O'Malley (Rita Hayworth). She likewise falls in love with him, even though she's scheduled to marry millionaire Charles Gardner (Alan Mowbray). The relationship is endangered when Gregory faces deportation to his own country, but baton-wieldig Kostelanitz comes to the rescue by making Gregory a radio singing sensation. Talented child actress Edith Fellows, who in previous films had been given top billing over Rita Hayworth, is somewhat wasted in the role of Rita's kid sister. Of the film's six songs, "It's a Blue World" is the singular highlight.

Andre Kostelanetz
as Himself
View All

Critic Reviews for Music in My Heart

The trite story is developed in so obvious a way that one becomes bored by the time the picture is half finished.

Audience Reviews for Music in My Heart

Minor B picture with Rita on her way up. The best part of this is the supporting cast with old reliables Eric Blore, George Tobias and Alan Mowbray adding a dash of humor to the proceedings.

Music in My Heart Quotes