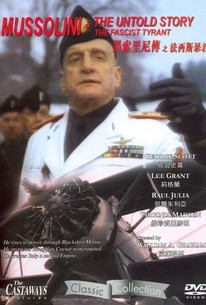 The story in this two-part TV biopic was probably "untold" mainly because it was untrue. According to the revisionist script by Stirling Silliphant, Italian dictator Benito Mussolini (overplayed by George C. Scott) may have been a fascist, a tyrant, a mass murderer and an intimate of Adolf Hitler, but he also had his warm and fuzzy side. This was manifested in his genuine love for his gorgeous mistress Clara Petacci (Virginia Madsen), whose devotion to Il Duce was equally strong, so much so that she willingly went to her death along with him when the Axis collapsed and the ex-dictator was summarily shot. Despite his extramarital shenanigans, Mussolini had plenty of affection left over for his long-suffering wife Rachel (Lee Grant) and his children. With a cast comprised largely of non-Italians (notably the aggressively Irish Gabriel Byrne as Mussolini's son Vittorio), this epic had more phony dialects than a Marx Bros. picture. Despite its distant relation to the facts and its flaccid treatment of one of history's darkest periods, Mussolini: The Untold Story (filmed not in Italy but in Yugoslavia) garnered respectable ratings when it was originally telecast by NBC on November 24 and 26, 1985--and also earned a brace of Emmy award nominations.

There are no critic reviews yet for Mussolini: The Untold Story. Keep checking Rotten Tomatoes for updates!

There are no featured reviews for Mussolini: The Untold Story at this time.