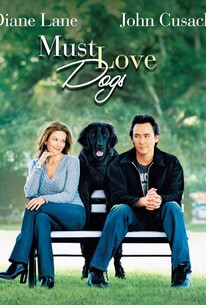 Critics Consensus: Despite good work from its likable leads, the romantic comedy Must Love Dogs is too predictable.

Critics Consensus: Despite good work from its likable leads, the romantic comedy Must Love Dogs is too predictable.

Critic Consensus: Despite good work from its likable leads, the romantic comedy Must Love Dogs is too predictable.

A woman finds herself drafted into the battle of finding the perfect man in this romantic comedy. Sarah Nolan (Diane Lane) is a kindergarten teacher in her mid-thirties who is still dealing with the emotional aftermath of her divorce eight months ago. While her sisters, Christine (Ali Hillis) and Carol (Elizabeth Perkins), both think Sarah needs to start dating again, Sarah herself isn't so sure. Carol decides to force the issue by posting Sarah's photo and profile on an Internet dating site, and soon a number of seemingly eligible bachelors are sending her e-mails in hopes of a date. However, nearly every man she meets turns out to be a loser, with the exception of Jake (John Cusack), who is smart, good looking, and even brings along a dog for their walk in the park (though he doesn't tell her the pooch was borrowed for the occasion). However, Sarah also makes the acquaintance of Bob (Dermot Mulroney), the divorced father of one of her students, and she finds herself having to choose between two potentially worthwhile men. Meanwhile, Sarah's widowed father, Bill (Christopher Plummer), decides to give Internet dating a try, and lands himself a new steady in Dolly (Stockard Channing). Must Love Dogs is based on the best-selling novel of the same title by Claire Cook.

Will McCormack
as Jason

Shana Hiatt
as Hostess
View All

News & Interviews for Must Love Dogs

View All Must Love Dogs News

Critic Reviews for Must Love Dogs

Cusack in particular seems to have embellished his role with an assortment of verbal quirks that suggest he wasn't too happy with what was on the page.

If only the whole script had been as sharp as some of Cusack's caustic one-liners, then this might have appealed to more than just the Chardonnay brigade.

John Cusack and Diane Lane need to put out personal ads saying, 'Must have screenplay.'

It's hard to cheer for a film that wears a slight sneer when it comes to its leading lady.

No, Must Love Dogs, earned its smiles, and the only bone I really have to pick is that, in the end, I failed to bring enough tissue.

There's no compelling reason why these two characters ought to be compatible except that their names come first and second in the opening credits.

The perfect film for you to snuggle up with the one you love.

Must Love Dogs is flooded with characters so quirky, it's like the film takes place in an alternate universe.

An insult to the viewer's intelligence, which sticks to silly slapstick while failing to get around to making a mature statement about relationships.

If not for the talent and natural charisma of its star, Diane Lane, this would be an entirely worthless enterprise.

Cusack, twitchy and yammering as he may be in real life as well as on celluloid, is capable of more, and Lane's talents are practically wasted.

Audience Reviews for Must Love Dogs

Average film, with a few funny scenes. It's been a long time since I've watched this film and I only vaguely remember it. Shows how good it is... The funniest scene was most probably when he tried getting a condom. The only part that really had me laughing. Other than that, nothing brilliant.

Average romantic comedy. I originally rated this only two stars, but five years on from first viewing, I am a little older and can relate a bit more to Diane Lane's depressed late 30's divorcee. Diane is obviously very attractive for her age, and I like John Cusack, but I have to say the main problem here is that they are not at all a convincing couple. She seems a little too conventional for him, and I never really bought them as an item at all. Any "aah" moments I had were gooing over the beautiful big dog. Probably not a great thing in a romantic film. There are a few laughs here, such as her answering her own father's personal add, and Stockard Channing is fantastic as Dolly, but it's not enough to make this a must see, Not bad for a weekend rental, but ultimately falls flat.

Diane Lane is good as always. She and Christopher Plummer have a nice chemistry as father and daughter but John Cusack gets more annoying as time goes by.