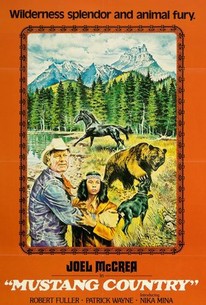 After 14 years' retirement, Joel McCrea chose to appear in Mustang Country. Looking extremely robust, the septuagenarian McCrea plays Dan, a Montana rancher, vintage 1925, who is in pursuit of a wild mustang. He is joined in his quest by teenaged Native American lad Nika Mina. The magnificent mustang and a dog named Rote very nearly steal the show. Western regulars Robert Fuller and Patrick Wayne (John's son) round out the dramatis personae of the small-scale but superior Mustang Country. ~ Hal Erickson, Rovi

It's the last movie for the 70-year-old Joel McCrea, who came out of retirement to make this pleasant Western.

There are no featured reviews for Mustang Country at this time.