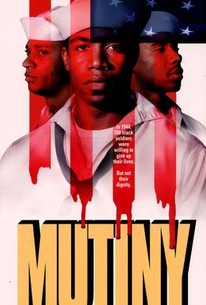 This made-for-television docudrama that aired on March 28, 1999 on NBC, relates the story of an actual event that occurred during World War II, but is centered around the lives of fictional characters. On July 17, 1944 at a U.S. naval base near San Francisco, a ship exploded causing the deaths of 323 men and injuring another 390. Just over 200 of the dead and another 200 of the injured were African-American Navy personnel. The story begins with the events that led up to the tragedy, with the second half of the film describing the actions of the men who refused to report back to work the next day after the explosion. Initially, 250 of the men refused to return, fearing another catastrophe. When base officers threatened to charge them with mutiny, 200 returned to work. The 50 who refused to return were given dishonorable discharges, in addition to 15 years of hard labor from the mutiny convictions. Eventually, the sentences were reduced to 4 years, but no official governmental acknowledgment of wrongdoing has ever been made.

There are no critic reviews yet for Mutiny. Keep checking Rotten Tomatoes for updates!

Makes a case for being the worst movie I've ever seen. Thank God I saw the "Mystery Science Theater 3000" version of it. Dead characters re-appear the SCENE AFTER THEY'RE MURDERED, the dialogue is an utter mess, and Santa Claus is the captain of the ship. Only watch the MST3K version of this.