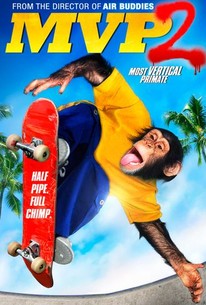 Home Improvement's Richard Karn lends his talents to this family-oriented animal-sports adventure from the producers of another animal-sports picture, Air Bud. MVP II: Most Vertical Primate picks up the story line of the first film in the series, MVP: Most Valuable Primate, but transfers its star monkey from the suburbs to the city, and switches his sport of choice from hockey to skateboarding. MVP II opens with the lovable Jack being ousted from his hockey team, the Seattle Simians, and having to hit the road after being falsely accused of league misconduct. Jack ends up in the city, where he's befriended by Ben (screen newcomer Scott Goodman), a homeless skateboarder, and Ollie (Karn), a skate shop owner. Jack proves to be as adept at mastering the half-pipe as he does at delivering a slap shot, and before long, he and Ben are crashing amateur skateboarder competitions all over the country.

Bob Burnquist
as Himself

If future installments are this soulless, it's a franchise best served on Saturday morning television.

Much like the last one, unoriginal, unfunny, sappy kiddie crap.