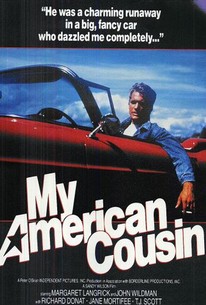 A 12-year-old Canadian girl comes of age thanks to American rock music in this comedy-drama from director Sandy Wilson. The somewhat repressed Sandy Wilcox (Margaret Langrick) is visited by her cousin Butch (John Wildman), a handsome young man from the U.S.A. who passes his favorite musical tracks along to his impressionable younger relative. As the two begin to form a bond, Butch's true mischevious nature is revealed.

Critic Reviews for My American Cousin

Instead of filmmaking... we get fake intimacy.

An energetic and authentic portrait of a 12-year-old girl's coming of age that reveals the mixed feelings young people have about sex, rebellion, independence, and self-esteem

The film works a gentle spell around its viewer, and ends up leaving an unexpected lasting impression.

Audience Reviews for My American Cousin

There are no featured audience reviews yet. Click the link below to see what others say about My American Cousin!