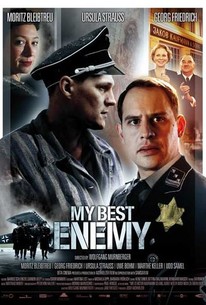 In prewar Vienna, Victor Kaufmann (Moritz Bleibtreu/Soul Kitchen, The Baader-Meinhof Complex, Run Lola Run) and Rudi Smekal (Georg Friedrich/ Import/Export, Klimt, The Piano Teacher) had been the closest of friends, ever since childhood. But with Austria's annexation into the Third Reich, Rudi throws his lot in with the Nazis, hoping to gain a leg up by denouncing his Jewish friend and confiscating a Michelangelo sketch owned by Victor's family. The Kaufmanns are sent to a camp-until the authorities discover they only managed to take a forgery, with the whereabouts of the genuine artwork known only to Victor. Determined to find the real Michelangelo, the Nazis bring Victor in for interrogation. But a stormy night and a partisan attack upend their plans, and Victor seizes an opportunity to turn the tables on his captors through a daring scheme of switched identities. (c) IFC

Critic Reviews for My Best Enemy

The film plays mostly as an uneasily satirical thriller.

An awkward blend of anti-Semitic atrocities and identity-swapping absurdity, the World War II drama "My Best Enemy" struggles to find a convincing tone.

The script relies on too many unlikely twists, but Bleibtreu manages to sell them all.

A movie largely devoid of attitude or suspense.

My Best Enemy bleeds suspense like a pin-pricked tire. It wants to be clever, but survivor tales bring with them too much muck.

While the film generates some mild suspense and the period re-creation is convincing enough, the twists eventually become more contrived and preposterous.

Neither the plot of this farfetched caper nor Murenberger's approach to it, do any kind of justice to what is still, whether some people like it or not, one of the most terrible episodes in human history.

This twist-heavy World War II drama would play as an absurdist comedy if the director wasn't so dead set on excluding just about any trace of humor from his self-serious project.

Audience Reviews for My Best Enemy

There are no featured audience reviews yet. Click the link below to see what others say about My Best Enemy!