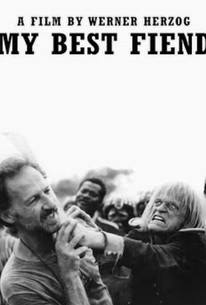 To say the working relationship between director Werner Herzog and actor Klaus Kinski was often stormy strains the boundaries of understatement. Kinski's tirades against Herzog are the stuff of legend -- Kinski's scabrous autobiography All I Need is Love features a number of venomous rants against the director far too foul to recount here, while Herzog had to threaten Kinski with murder to get him to complete his work on Aguirre, The Wrath Of God. However, the collaboration between these two men, no matter how combative, resulted in the finest, most memorable work of either's career, including Aguirre, Nosferatu, Woyzeck and Fitzcarraldo, before Kinski's death in 1991 ended the partnership. Mein Leibster Feind/My Best Fiend is a documentary by Herzog about his work with Kinski, and portrays the actor with a large degree of affection while making no secret of his volatile nature (an actor displays a scar on his head from a wound Kinski inflicted with a sword, while an outtake from Fitzcarraldo shows him terrorizing a member of the crew). Despite their remarkable differences, Herzog sums up their working relationship with admirable conclusion: "We complemented one another. I needed him and he needed me." Mein Leibster Feind/My Best Fiend was produced for European television, though it did receive a screening (out of competition) at the 1999 Cannes Film Festival.

While My Best Fiend -- does a splendid job of chronicling the high drama and creative pinnacles of their work together, it emphasizes the most public and bleakly amusing aspects of their story.

My Best Fiend is about two men who both wanted to be dominant, who both had all the answers, who were inseparably bound together in love and hate, and who created extraordinary work -- while all the time each resented the other's contribution.

Herzog's portrait of his friend is as mad as his films, and as fascinating.

With generous clips from Herzog and Kinski's collaborations, My Best Fiend is one of the great portraits of artists fighting, even with murderous rage, to reach the sublime.

What's the difference between artistry and bravado? This isn't a question I generally feel inclined to ask, but I'm compelled by the work of Werner Herzog, who scrambles the two until it's difficult to tell which is which.

A thoughtful and clever examination by the director of his longstanding friendship and creative partnership with the late Klaus Kinski.

Herzog's and Kinski's collaboration was one of the strongest in cinema, and the movie does justice to that energy.

Herzog reveals the genius and madness of his best fiend Klaus Kinski.

It feels a lot more like a cheap shot than a tribute.

Kinski's egomania is offered up by a quote of his that the only interesting landscape on earth is that of the human face.

The pairing of the director and actor invariably resulted in extraordinary creative collaborations. These men -- arrogant, ambitious, sadistic, fanatical, and in Kinski's case, probably insane -- certainly deserved each other.

My Best Fiend is Herzog's contentious remembrance of the late actor but, while fascinating, it really doesn't add up to much.

In this very unusual documentary filmmaker Werner Herzog revisits the Peruvian jungle and other locations throughout Europe, where he filmed movies with his long-time protagonist Klaus Kinski. Throughout this journey that mostly consist of interviews with fellow companions and Herzog's unbelievably funny anecdotes about the love-hate relationship with the egomaniac actor. While all that's filmed and presented really calmly and may sound boring for many, it is still full of humor and very interesting insights both into film making and Kinski's personality. There is also some original footage of his tantrums, which is clearly the highlight of this film. The fact that there was more to Kinksi than met the superficial eye is the surprise of this film. And the final scene with the butterfly is so incredibly sweet and beautiful, you actually feel maybe he wasn't such an asshole after all.

Kinski is even more insane that you've heard.

A revealing documentary that is highly entertaining, especially if you are a fan of the work of Herzog and or/ Klaus Kinski. They made some fantastic films together and this well designed documentary answers a lot of questions and is at times, very amusing and also very touching sometimes - especially the last image of the enigmatic Kinski handling a butterfly in the jungle. This is the second documentary I've seen by Herzog and its a style he obviously excels at.