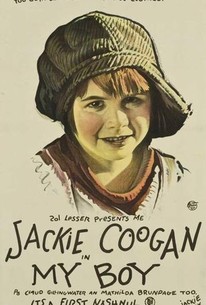 One of the most accessible of Jackie Coogan's silent vehicles, My Boy is also one of his best and most representative. 7-year-old Coogan plays an orphaned immigrant who hides out from the immigration authorities in the shack of impoverished ex-sea captain Claude Gillingwater. At first, Gillingwater is resistant to Coogan's moppet charms, but before long they are as a close as father and son. The officials eventually catch up with Coogan, and the stage is set for a unhappy ending (even after seven decades this sequence will have you reaching for the Kleenex). Fortunately, Coogan's wealthy American grandmother decides to adopt both Jackie and lovable old Gillingwater. My Boy was "supervised" by Coogan's father, a set-up roughly comparable to the proprietary interest taken in recent years by the father of Macaulay Culkin.

Critic Reviews for My Boy

My Boy is heavily sentimental throughout, but where Jackie Coogan is concerned the sentiment is genuine, and anyone who can watch him unmoved is indeed a master in the art of callousthenics.

There are no featured reviews for My Boy at this time.