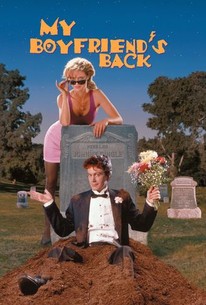 My Boyfriend's Back Photos

My Boyfriend's Back is a surprising back-from-the-grave teen comedy from Disney. High-school nerd Johnny Dingle (Andrew Lowery) has a desperate plan to win the affections of his sweetheart (Traci Lind), but winds up dead as a result. That's not a problem, as Johnny returns from the grave, still seeking his girl but with a craving for human flesh as well.

Bob Dishy
as Murray the Gravedigger

Paxton Whitehead
as Judge in Heaven

Jerry Haynes
as Minister at Funeral

Delray Cordell
as Kid on Bike

Jack Craig
as Townsperson
View All

Critic Reviews for My Boyfriend's Back

Simply put, absolutely none of it works. The movie utterly fails to set a foundation for its dark fantasy, effectively turning every character into a moron.

My Boyfriend's Back is obviously aiming for the subversive high school yuks of 1989's Heathers, but the story line never bothers to make sense.

If My Boyfriend's Back is an irredeemably silly movie, it has an engaging lightness of tone and uniformly impeccable performances by a cast that maintains just the right attitude of deadpan parody.

To put it in teenspeak, "My Boyfriend's Back," a saga of a decaying zombie lad, rots.

A sweet, and oddly touching tale of undead love.

As naff and dreadful as the title suggests.

My Boyfriend`s Back is the lamest of the lame so far.

Even viewers able to get past the disturbing setup of the film's critical plot element will find an uneven mess of under-realized ideas and overdone grotesqueries.

Better he should've stayed away.

Audience Reviews for My Boyfriend's Back

Funny that as I'm watching Santa Clarita Diet on Netflix (good show), I decide to watch this movie. Well, maybe not really all that funny, but it's certainly worth noting. Granted, the similarities end with the fact that both lead characters come back from the dead. The lead character in Santa Clarita Diet feels the urge to constantly eat human flesh and, impulsively, she does so, while her husband tries to help her adjust to the changes by helping her out with whatever she needs. Johnny, the undead kid in this movie, for the most part, tries to resist his urges even though consuming human flesh will give him more time to spend with his the girl he has been in love with since he was 6 years old. At its core, there's a surprisingly sweet love story here. Guy literally took a bullet for this girl and came back to be with her and take her to the prom. The problem is that I just don't find that the romance between Johnny and Missy was all that believable. Never mind the fact that Johnny is a zombie or anything of the sort, but the events of this movie place during the span of, maybe, four days. Less than a week and all of this happens. While Johnny may feel like he's in love with Missy, the fact of the matter is that, before the movie starts, he literally has no contact with her. I can understand that he's lusted for her, which is weird since this crush started when he was six, but he isn't in love with her. Same thing applies to Missy, except much, much worse. Hell, I don't even think Missy even noticed Johnny, much less felt any sort of attraction to her. And, in spite of that, in four days of, basically, doing nothing together, she falls madly in love with him and ditches her boyfriend of six yeas, the typical jock douche. Granted, Johnny and Missy spend some time together at the movies, school and at home. But you never get a sense that they're truly, actually falling in love with one another. And for a film that's trying to sell you on that aspect, having two characters that barely know each other fall in love just doesn't work nor is it believable. Don't get me wrong, Andrew Lowery and Traci Lind had some good chemistry together, but the development of their relationship just didn't convince me. The reason why I am giving the movie this rating, however, is that it can actually be a legitimately funny movie. I'm not saying it's the best comedy you will ever see, because it is not that, but I definitely think this movie has more clever dialogue than many people give it credit for. Don't wanna say that it's ahead of its time, because it's really not, but some of the dialogue feels ripped from today's style of comedy writing. I don't know what it is, but the dialogue doesn't feel as out of date as some others 80s comedies might feel. One of my favorite parts is how oblivious everybody is to Johnny Dingle (yes, that's really his last name) being undead. Well, oblivious isn't the right word to use. Everyone is well-aware but nobody really reacts like how one would normally react in this situation. Granted, someone, in this town, came back from the dead before, but seeing everyone act so casual about Johnny's 'revival' is one of the highlights of the movie. To me, the comedic highlights have to be Johnny's parents. They may not appear that much, but they certainly make their moments count. There's one scene where they bring a little kid for Johnny to feast on. A little fucking kid. Talk about dark, but it was certainly funny. I don't wanna say the movie provides some memorable moments, because I'm honestly having trouble recalling them as we speak. And I only finished watching this about 7 hours ago. Perhaps that says more about my memory and less about the movie, who knows? But I digress, I feel that the romantic stuff holds the movie back from what, really, is a pretty good little comedy. What I like about it is that it's a movie that's certainly not afraid to be a little weird. And maybe its weirdness is tame in comparison to, say, someone like Wes Anderson, who specializes in weirdness and quirk. But this is a movie that's not afraid to put itself out there and embrace the absurdity of its concept. Sometimes its attempts at comedy might not always be successful, but at least they take some risks. And, again, it's not like this is the most ambitious movie ever made. I don't want it to sound like that. This is just a silly horror comedy that just tries to go above and beyond the call of duty when it comes to making you laugh. It's just a shame that a forced and inorganic romance was forced in there as well. That certainly gets in the way of what I would have said was a pretty good movie. But, since the romance between Johnny and Missy was in there, this ends up just falling short. This is an entertaining average movie, for sure, but the key word is still average. Therefore I can't really give this a wholehearted recommendation, though a lot of people would probably enjoy this anyway.

I used to get excited as a kid when this would come on tv! LOL

I thought this was really cool. I thought it was pretty neat. it is a bit dated but other than that it's a great watch.

My Boyfriend's Back Quotes