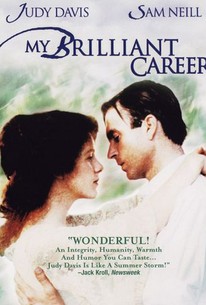 Both actress Judy Davis and director Gillian Armstrong made a big splash on the international scene with this charming Australian film that examines late 19th century Australian society from the perspective of a headstrong woman who refuses to follow convention. The film charts the developing self-awareness of Sybylla Melvyn (Judy Davis) as she grows from an insecure tomboy to a self-assured woman. Sybylla wants to be a writer and stuns her family and friends by her insistence on following her dream. Despite the objections of her family acquaintances, she rejects the marriage proposal from the rich Harry Beecham (Sam Neill) to continue going her own way, in spite of the odds stacked against her in a repressive Victorian environment.

News & Interviews for My Brilliant Career

View All My Brilliant Career News

Critic Reviews for My Brilliant Career

This is a modest, clear sighted film, and it profits considerably from a lack of the bravura landscape photography that most directors would have used to puff up a movie set in Australia.

This Australian film is a charming look at 19th-century rural days in general and the stirrings of self-realization and feminine liberation in the persona of a headstrong young girl who wants to go her own way.

The period atmosphere is evoked with careful delicacy, but the characters rarely become more than stereotypes with performances (Judy Davis excepted) to match.

My Brilliant Career marks the beginning of exactly that for both the film's daring, assured, high-spirited Australian director, Gillian Armstrong, and its rambunctious young star.

The action and sentiments are familiar to the point of cliche, and there isn't much life in Gillian Armstrong's academic direction.

A story of one woman, two suitors, and a passion for the pen.

My Brilliant Career is not only a good plot - in the full Victorian sense of that word - but is also a shimmering impressionistic gem to behold.

One of the key films of the Australian New Wave of the 1970s, My Brilliant Career represented breakthroughs for both director Gillian Armstrong and star Judy Davis.

Armstrong's subsequent sojourn in Hollywood never yielded a film as engaging and passionately felt as this, her brilliant feature debut.

The continent is distant, the backdrop strange but, as American women will deduce, the problems are very familiar.

The mise-en-scene is well composed, and the story is well told in this wonderful Australian work.

Audience Reviews for My Brilliant Career

A woman with literary aspirations falls for an upper class man who tempts her toward marriage, away from her work. The film sets up a familiar dichotomy: Sybylla finds that she must either pursue her career ambitions or settle down to the expectations of Victorian society and marry. Obviously, this is a familiar construct, one replayed to perfection in Henry James's Portrait of a Lady, but what I found lacking in My Brilliant Career was an exploration of who Sybylla is as an artist. After all, whether or not her book is good and should be written is significant. Instead, what becomes clear is how she doesn't fit in with Victorian, upper-class society and seems even more out of place with lower class society. Her only connection is with Harry Beecham, whom she rejects to pursue her work. Overall, because one side of the conflict is never fully explored, I found most of My Brilliant Career lacking.

Sybylla Melvyn is a girl with a spark. She's also a girl who refuses to let 19th century sensibilities extinguish it. Set in Australia in the late 1800's, My Brilliant Career chronicles the story of a woman years ahead of her time. Whoever cast Judy Davis as 'plain and ugly' ought to have their eyesight examined. Even without makeup she's absolutely radiant. Otherwise, she is perfectly suited for this engrossing, subtly romantic docudrama. Highly recommended.

Slow moving enlightenment drama with Judy Davis giving an excellent performance as usual. The characters are just to remote to really engage you leaving you feeling little for their stuggles.