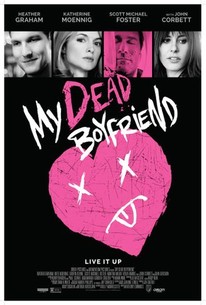 Mary's life has been defined by a string of temp jobs and a half-hearted attempt to become a writer. But all that changes when she comes home to find her boyfriend dead in front of the TV set. During her misadventures in trying to get rid of his ashes - accidentally becoming the bassist in a rock band; bonding with the dog he left behind; awkward encounters with numerous ex-lovers; Mary discovers that there was much more to her couch potato boyfriend than she ever thought imaginable.

Lauren Schaffel
as The Girl

The Lady Bunny
as Clerk

Kallan Wood
as Dancer
View All

Critic Reviews for My Dead Boyfriend

A mixture of misplaced gallows humor, wildly over-the-top caricatures and a gimmicky use of animation.

"My Dead Boyfriend" desperately tries to look and sound like a quirky indie hit, but that's not an achievable goal when you have an unlikable lead character indifferently rendered by a name star.

It's the type of indie film that might have played at a minor festival at the turn of the millennium, with the audience offering pity laughter for the cast and crew in attendance and the director waiting in vain for news of an acquisition.

Slacker that it is, the film never seems willing to put in the necessary work to live up to its potential.

Living or dead, it's well past time to break up with My Dead Boyfriend.

To be fair, these actors are good at said talking, and they're not unappealing to watch, but the whole narrative seems rather pointless in the end.

The ridiculous concept manages a few broad laughs, but the characters are consistently more obnoxious than endearing.

Certain elements of the production are handled successfully, and if one can focus exclusively on the positives, the "My Dead Boyfriend" viewing experience might not register as an unfortunate disappointment.

Many amusing scenes are included in this unusual comedy, yet something seems missing. I think the main character rates low on likability. But watch for John Corbett's hilarious musical routine!

There's a place for low-budget quirky, zany comedies, though they require a lightness of touch and appealing characters-regrettably in short supply in My Dead Boyfriend

The laughs are scattered in this comedy which finds a lot of 40something actors playing New York caricatures of their much-younger selves.

Audience Reviews for My Dead Boyfriend

There are no featured audience reviews yet. Click the link below to see what others say about My Dead Boyfriend!