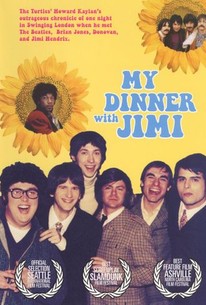 My Dinner with Jimi Photos

Although he later received notoriety as a member of Frank Zappa's Mothers of Invention and as half of the duo Flo & Eddie, Howard Kaylan is likely best remembered as the lead singer of the 1960s pop band the Turtles. It is this period of his life that Kaylan illustrates in his autobiographical screenplay for My Dinner With Jimi. Beginning right before the band hit it big with their single "Happy Together," the film follows Kaylan (played here by Justin Henry from Kramer vs. Kramer) as he and his bandmates struggle through gigs at small clubs and spend their free time hanging out in a deli, discussing the draft with Jim Morrison (Bret Roberts), Mama Cass (Lisa Brounstein), and Zappa (Adam Tomei). When their song hits number one on the charts, the Turtles head out to tour England, where they catch up with their old friend Graham Nash (Chris Soldevilla). Nash takes the band to a club where they meet the Beatles and Kaylan has a lengthy chat with John Lennon (Brian Groh). Further cementing his rapid transformation from fan to star, Kaylan is then introduced to Jimi Hendrix (Royale Watkins), leading to the titular dinner. Featuring a supporting cast led by George Wendt, John Corbett, and Curtis Armstrong, My Dinner With Jimi was directed by Bill Fishman, best known for his cult-classic directorial debut, 1988's Tapeheads.

Critic Reviews for My Dinner with Jimi

More a collection of dubiously myth-serving, purple-hazed '60s' sketches than anything else.

Sweet and warm but not particularly profound.

We can groan over those terrible wigs all we want, but by the end of the picture, we're still taken in by Kaylan's dizzying story.

Audience Reviews for My Dinner with Jimi

There are no featured audience reviews yet. Click the link below to see what others say about My Dinner with Jimi!

My Dinner with Jimi Quotes