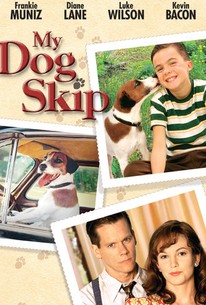 Critics Consensus: Critics say My Dog Skip is cute, wholesome entertainment for the family. It's especially designed to appeal to your sentiment, but you might find yourself choking up just the same.

Critics Consensus: Critics say My Dog Skip is cute, wholesome entertainment for the family. It's especially designed to appeal to your sentiment, but you might find yourself choking up just the same.

Critic Consensus: Critics say My Dog Skip is cute, wholesome entertainment for the family. It's especially designed to appeal to your sentiment, but you might find yourself choking up just the same.

The year is 1942. As the Allies unite overseas to keep the world safe for democracy, there are voices at home that are barely heard. One of them belongs to Willie Morris, a shy and gawky eight-year-old whose childhood is even more quiet and isolated than his home town of Yazoo, Mississippi. An only child, ignored at school and uncomfortable with girls, Willie looks up to and confides in next-door neighbor Dink Jenkins, the town's star athlete, who's preparing to ship out in the service of Uncle Sam. Willie's father, Jack Morris, a stern but good-hearted veteran who lost his leg in the Spanish Civil War, is chiefly responsible for Willie's overprotective upbringing. Pushing in the other direction is his mother, Ellen Morris, a capable woman who knows that what Willie needs most is some freedom and a friend. Willie's ninth birthday gives her an opportunity to offer him both, in the form of a Jack Russell terrier puppy that the delighted Willie names Skip. Skip's outgoing personality helps Willie to build a friendship with Rivers Applewhite, the prettiest girl in school. Skip then further serves as matchmaker for Willie and Rivers at the movie theater, and lends a paw after Willie is challenged by Big Boy Wilkinson, Henjie Henick and Spit McGee to prove his worth in a football game. With Skip's canine help, Willie starts becoming "one of the boys." Then unexpectedly, Dink returns to Yazoo. But the dark truth soon emerges: Dink, when confronted by the realities of war, went AWOL. In trying to reconcile his hero worship of the Dink he once knew with his disappointment in the disgraced soldier, Willie begins to contend with the complexities of war and human conduct. He reaches a new perspective on these matters through his father's eyes and his own. Dink fails to show up at Willie's first baseball game, and the disappointed Willie takes it out on Skip, who runs away. The dog's disappearance and subsequent recovery teach Willie the strength of forgiveness, and give Dink a chance to embrace the power of redemption. Ultimately, it is a dog's love that teaches Willie Morris lifelong lessons of the human spirit.

Enzo the Dog
as Skip

Moose the Dog
as Skip (older)

Nate Bynum
as Man on Street

Stacie Doublin
as Woman on Street

News & Interviews for My Dog Skip

View All My Dog Skip News

Critic Reviews for My Dog Skip

Great boy-and-dog tale, but be prepared for tears.

Taps into just enough of that connection between humans and dogs to make even jaded cat-lovers a little moist in the eyes.

In its own quiet, poignant, character-driven way, it's a movie for almost anyone of any age who's hungry for a beguiling 95 minutes.

Flaws and all, this is superior family entertainment in the tradition of quality that co-producer Mark Johnson has long championed.

It's worth the trip for kids and grown-ups, because they'll find a quietly moving and powerful story...

...a gem of a movie for children and adults, despite its clichés.

Not a mawkish dying-dog tearjerker, "My Dog Skip" carries a touch of Mark Twain, with quasi-dangerous tall tales and awareness of a gap between childhood and boyhood. Plus, as it's said of "The Adventures of Huckleberry Finn," there's cussin' in it.

Features two irresistible lead characters -- and you can't always say that about a movie.

So riddled with live-action Disney movie clichés that I kept waiting for Cruella de Ville to show up and threaten to skin the dog alive.

An affectionate and tender family film...

Audience Reviews for My Dog Skip

My Dog Skip is a very good family drama. The film is quite simple, but manages to be very good. The cast do a fine job here, and lead actor Frankie Muniz is very good compared to his other film roles. This is a well acted film, one that is sure to appeal to the entire family. This film has charm, a well written story and a good dose of comedy into its drama, which makes it a memorable film. The film is nothing new, but it works well enough to be fun, dramatic, sad and entertaining. What makes this film worth watching is the performances of its cast, and the witty script which make the film much better even with a not so brand new plot. This is the type of film we've seen many times before, however it still manages in being a must see film due to a good script. This is also a well directed film, and it's one terrific film that is sure to please anyone of all ages. This is among the best family films in the last fifteen years, and it has something for everyone. The film is a must see if you're looking for the perfect family film, and it has everything you'd expect from a good family oriented drama comedy. The film is not perfect, but it still has enough going for it to make it worth watching. With a good cast, a good story and good directing, My Dog Skip is a wonderful film. This is one of those rare family films that is actually something that anyone of any age groups will surely enjoy. The film is not cheesy and is always fun, dramatic and sad.

Cute, but no recommendable movie.

This true story has been re-created for one reason only, to touch the hearts of all ages and to feel sympathy for a boy and his dog as he faces the challenges that every boy his age faces. This film is brilliantly acted, well casted, good-hearted, family-friendly, funny, and will have you in tears by the time the credits role. This film touched me in ways that many movies have been incapable of touching me in. There may be a few scenes that seem a little undeveloped and rushed, but that is not enough to stop this film from being what it is: amazing! I feel some charcters (particularly the bullies) are a little too quirky for such a heart-felt story, but this film knows what it is trying to accomplish, and does it with ease. It will make you think twice about life, and just how precious every living thing in life truly is. Fantastic Film!

Very touching and emotional to the max. Full review later.