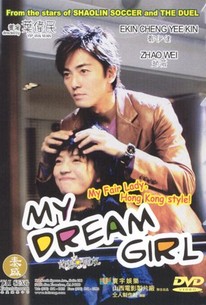 A man expecting to give a woman a new hairstyle instead winds up giving her his heart in this romantic comedy from Hong Kong. Zhang Tian (Richard Ng) is the successful proprietor of an automobile company who has just made the surprising discovery that he's the father of a grown daughter, Zhang Ning (Vicki Zhao Wei). Ning has been living on the poor side of Shanghai for years, and in Tian's mind doesn't look like the daughter of a business tycoon. Thinking she needs some sprucing up, Tian hires Joe (Ekin Cheng), a cosmetologist between jobs, to give Ning a makeover and show her how to behave in polite society. It doesn't take long for Joe to discover his job is harder than he expected, but things get especially complicated for him when he realizes he's falling in love with her.

Critic Reviews for My Dream Girl

There are no critic reviews yet for My Dream Girl. Keep checking Rotten Tomatoes for updates!

Audience Reviews for My Dream Girl

Good chemistry between Ekin and Zhao gives this film a boost.